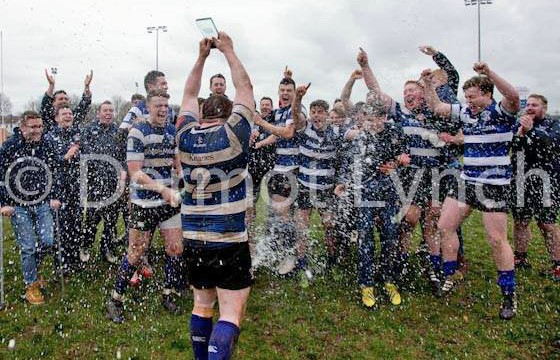 Old Crescent took on UCC in the Mardyke in a much postponed Munster Senior Cup quarter final clash last Saturday.  Our players had little time to recover from our celebrations last weekend after topping the table in UBL Division 2C and winning automatic promotion to Division 2B, and we fielded a much changed side from the previous weekend, with seven changes in the match 15, nine changes in the match 22, and six debutants in the match day squad.

Crescent opened the scoring after seven minutes with a converted penalty taken by Shane O’Brien.  Crescent dominated the game from early on and much of the first half was played in the UCC half.  After several attacks taking us to the UCC line, Captain Cathal O’Reilly forced his way over for a try which was converted by Shane O’Brien.

As half time approached, Crescent were again on the offensive and from a ruck on the UCC five meter line the ball was quickly fed out to winger Conor Lenihan who beat the cover to touch down beside the corner flag.  The difficult conversion was missed leaving Old Crescent 15 points to nil ahead at the break.

Crescent took on where we left off in the first half and were soon on the offensive again deep into the UCC 22.  Prop Alex Simpson showed some neat skills to break away from the back of a ruck and stretch out to touch down for a try. Shane O’Brien added the conversion to put Old Crescent 22 points to nil in the clear.

We were unfortunate to suffer a rather harsh yellow card ten minutes into the second half and UCC scored a converted try while Crescent were down to 14 men.  However, we were soon on the attack again when we got back to full strength, and Captain O’Reilly again led from the front when he scored his second try which Shane again converted.

UCC scored an unconverted try a few minutes later to bring theme within 17 points but it was all Old Crescent for the last quarter of the game.  With ten minutes to go, Sean Monaghan scored a try which was converted Shane O’Brien, and just before the final whistle scrum half Val McDermott showed a beautiful piece of individual skill by collecting his own chip over the UCC back line and touching down unhindered for a try.  Shane O’Brien again added the conversion to leave the final score UCC 12 Old Crescent 43.

Speaking after the game, a delighted Eugene McGovern, Director of Rugby, said “We were up against a UBL side two divisions above us. We took this competition seriously, even though our focus up to now was on the UBL. Having won our UBL division, we came here to win and can now turn our focus to the cup semi final against Young Munster. We’ve had a phenomenal season for the club and are looking forward to a good run-in.”

That we could field a team with seven changes from the side that defeated Tullamore in the final UBL fixture a week previously is a tribute to the depth and quality of the current Old Crescent senior squad.  The game was also notable for the MSC debuts of six of our Under 20 players, two of whom scored tries, Conor Lenihan, Val McDermot, Niall Hardiman, Sean Fitzgerald, Jack Broderick, and Andrew Harrison.  Crescent will have home advantage when we take on Young Munster in the MSC semi final on a date to be decided.