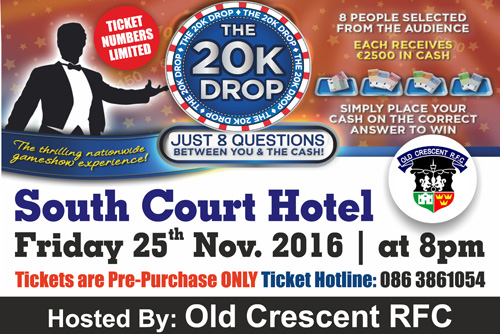 After a traumatic weekend for Limerick and Munster rugby, Old Crescent got back on the playing field on Monday evening when our Second side took on UL Bohemians in the North Munster Senior Seconds League on a still dry autumn evening perfect for rugby.

Crescent started strongly and were camped in the UL Bohs half for the first quarter.  Our hard work paid off when we were awarded a penalty which Barry Neville converted to put us in front.  Bohs broke deep into our half from the restart and went over in the corner for a try which wasn’t converted.

After that wake up call, Crescent got back into the game and midway in the first half David Hurley went on a searing run in which he dodged through the UL Bohs defence from the 22 to touch down without a finger being put on him.  Barry Neville added the conversion to put us in front again by 10 points to 5.

Barry added another penalty on the half hour, and we went further ahead coming up to half time when Dave Egan scored a try out wide.  The conversion attempt was marginally wide but we led at the break by 18 points to 5.

We continued where we left off with Barry Neville adding a third penalty conversion ten minutes into the second half.  After further Crescent attacking play, Barry crossed the UL Bohs line for our third try which he duly converted himself, bringing the score to Old Crescent 28 UL Bohs 5.

As the game went into the last quarter, continued Crescent pressure yielded our fourth try which was scored by Sean Cunningham.  The conversion was missed but we now led by 33 points to 5.

With both teams emptying their benches, the game lost a bit of shape and UL BOhs got in for a consolation try near the end which they converted.  The final score was Old Crescent 33 UL Bohs 12.  Overall, it was a very good work out for our Second side with several players putting their hand up for first team selection.

On Tuesday evening in the Hurlers Bar in Castletroy, at a reception attended by the Mayor of Limerick City & County, Councillor Kieran O’Hanlon, Old Crescent RFC announced that the club will host the new nationwide show “The 20k Drop” in a major fundraising drive at the South Court Hotel on Friday, 25th November 2016.
Announcing the 20k Drop fundraising event, Pat Monaghan, President of Old Crescent RFC, said “Old Crescent has doubled the size of its grounds at Rosbrien in the last year and the proceeds from this fundraiser will go towards the long term development of the sporting facilities at Rosbrien. He extended an open invitation to all members, supporters and friends, of Old Crescent to attend the 20k Drop event in the South Court Hotel on the 25th November”.
Mayor of Limerick City & County, Councillor Kieran O’Hanlon, congratulated Old Crescent on their achievements both on and off the field in recent years and wished the Club every success with its fundraising effort.
Pat Monaghan said the Club are delighted with the response from local companies who have come on board as major sponsors and advertisers, and he concluded by thanking the Old Crescent 20k Drop major sponsors, ABP Foods, Bluebird Homecare, Energia, Lyons of Limerick, Rockin Joe’s Diner, Rugby Travel Ireland, and Zurich Life and Pensions, for their support.

The 20k Drop is run nationwide by Pallas Marketing and is similar to the TV show ‘The Million Pound Drop’. Each of the 8 contestants selected will receive €2,500 and must place their money on each of 8 correct answers. Having answered the 8 questions, the contestants will keep the remaining amount.

Tickets for the 20k Drop are €20 each or €50 for 4 and can be purchased from any Old Crescent committee member. Tickets will sell out quickly in advance of this most entertaining and fun-filled show and people are encouraged to purchase their tickets early.

Old Crescent has a very busy day coming up next Saturday with all our senior teams in action. The Ulster Bank All Ireland League resumes next weekend and Old Crescent First team will entertain Bective Rangers at home in Rosbrien next Saturday, kick off at 2.30pm.  The usual excellent pre match lunch will be held before the game and places can be booked by contacting Eddie Frost asap on 086 3537085.

Our Seconds play Garryowen in Dooradoyle at 5.30pm in a North Munster Seconds League clash. Our Thirds will take on UL Bohemians in a Gleeson League fixture away in Annacotty at 2.30pm, and our Under 20’s will host Cork Constitution at home in Rosbrien at 12.30pm in a Donal Walsh Trophy fixture. All games are on Saturday.