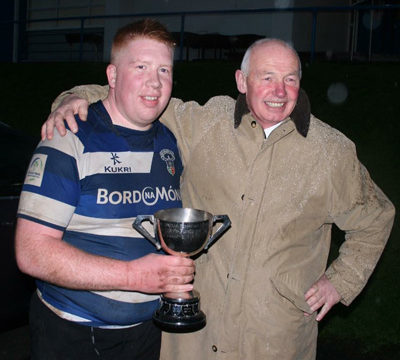 The Old Crescent Senior side and supporters made the long trip up north last weekend to play Dungannon RFC in the Ulster Bank League.  The fixture enabled the renewal of old friendships and rivalries with a club we first played against over 60 years ago. Due the vagaries of the AIL, the clubs had not met in over a decade.

Long before the All Ireland League, Old Crescent and Dungannon played each other on an annual home and away basis, and this relationship was strengthened in the early 1980’s when Dungannon RFC presented the Eric Shiells Memorial Trophy for competition between the two clubs.

The game started evenly, as would be expected with clubs beside each other in the UBL Division 2B table, and neither side dominated in the early exchanges.  Old Crescent were first to get some dominance and attacked deep into the Dungannon half with a quarter of an hour gone.  A series of close in line outs and mauls was topped off by a Val McDermott try for Old Crescent in the corner.  The difficult conversion was missed.

From the restart, Crescent were on the attack again from deep in our own half, and when it looked like we might break out again as the ball was moved quickly out along our back line, an unfortunate intercept  by the Dungannon Kiwi centre gave the home side the softest of scores under the posts.  The easy conversion was successful and Dungannon led by 7 points to 5, much against the run of play.

There were no further scores before half time but Crescent went into the break having played the more attacking rugby but behind on the scoreboard.

On one of Dungannon’s few excursions into our half, we were pinned down inside our 22.  We won the ball but our clearing kick was charged down and collected by a Dungannon player who touched down for another easy score.  The conversion attempt was successful and the Crescent side now found themselves behind by 14 points 5 midway through the second half, having played most of the rugby.

Looking at the scoreboard with a quarter of an hour to go, Crescent teams might have wilted in times gone by but our current team are made of sterner stuff and they set about getting back on terms.  Crescent attacked deep into the Dungannon half and after several phases in broken play, Briendan Guilfoyle broke through several tackles to score a superb individual try near the posts.  Shane O’Brien added the conversion and we were now within two points of our hosts with less than ten minutes remaining.

We continued to go for the win but several attacks broke down in the Dungannon half.  When it looked like Dungannon might hold out for the win, they infringed once more with time almost up.  Shane O’Brien bravely stepped up to take the difficult penalty attempt from out wide and coolly slotted it between the posts to give Crescent victory with the last kick of the game!

It was a great display determination and grit by the entire Crescent side to come back and secure the win having giving the opposition two soft scores.  At a presentation after the game, our captain Alex Simpson accepted the Eric Shiells Memorial Trophy from Malcolm Shiells, a son of the late Eric.  Our Senior team now take a well deserved break over the Christmas period and we look forward to returning the Dungannon RFC hospitality when the AIL resumes in Rosbrien on the 21st of January 2017.

Our Second’s were in action last Monday on a cold crisp evening in Rosbrien against Nenagh Ormond in a North Muster Senior Seconds League clash.  Crescent were first to score when David Hurley got in for a try out wide.  The conversion was missed.  Nenagh replied with an unconverted try at the end of a first half which turned into a war of attrition and lasted over 50 minutes with several yellow cards and injury stoppages.  Half time score 5 pits apiece.

Five minutes into the second half, Nenagh were awarded a penalty try to put them 7 points clear.  The game went to uncontested scrums due to injuries on both sides.  Crescetn got back into the game midway through the second half with a try scored by Niall Hardiman who crashed over the Nenagh line after a superb Old Crescent maul.  The conversion attempt was narrowly missed.

Crescent pressed hard for the winning score right to the end but Nenagh held out for the narrow win.  Final score Old Crescent 10 Nenagh Ormond 12.

Our Thirds had a big win over Newcastlewest by 31 points to 15 out in West Limerick last Saturday in a Gleeson League fixture.