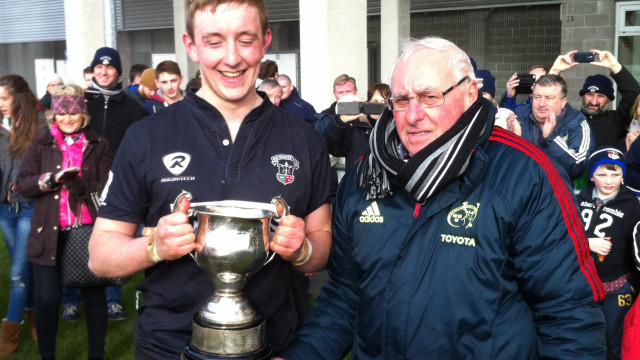 Sport was put into perspective last Saturday evening when Old Crescent learned of the sudden death of Jackie Lewis, 19 year old daughter of Greystones RFC Head Coach, Kevin Lewis, who had just seen his team emerge victorious in Rosbrien that afternoon.  On behalf of Old Crescent RFC, our President, Dr Michael O’Flynn, extended the Club’s deepest sympathies to Kevin and his family, and to Greystones RFC, on their tragic loss.

The UBL game itself in Rosbrien last Saturday afternoon was the proverbial game of two halves, dominated by a gale force wind blowing down the pitch for the entire afternoon. Old Crescent had the wind advantage in the first half and were quick to apply pressure with an early penalty attempt by Shane O’Brien just going wide.

Crescent were first to score when Sean Monaghan pounced on a charged down ball close to the Greystones line and dotted down for a try. Shane missed the conversion in the difficult swirling wind.  Crescent were very aware that they would need to turnover with more than a five point lead, and in the second half of the first half, we extended our lead with two tries by Gareth Quinn McDonagh and Darragh Arthur, and Shane added to two conversions to put us 19 points to nil in front.

The gloss was taken off this lead a few minutes later when some poor Crescent tackling allowed Greystones in for an unconverted try.  However, Crescent were not finished and after some superb ground made by Sean Monaghan the ball was moved quickly to his brother Cathal on the wing who rounded the defence and got in for an unconverted try.  Crescent led by 24 points to 5 at the break, and had secured a 4 try bonus point, but would have to withstand a wind assisted onslaught from Greystones in the second half.

Now with the strong wind advantage, Greystones were quick to score with a converted penalty early in the second half.  Crescent managed to stem the Greystones attack through dogged defence but midway through the half, Greystones scored two converted tries in quick succession  to bring them right back into the game to within four points of Old Crescent

Crescent continued to attack into the wind and their pressure was rewarded when Kevin Doyle crashed over for what their supporters hoped would be the decisive try to extend the home side lead to nine points.

However, Greystones were not finished and continued pressure on our now weakening scrum near our own line resulted in a penalty try being awarded against us, which they converted to narrow the gap to just two points behind.  It looked like we might hang on by the skin of our teeth in the last few minutes, but unfortunately, Greystones were to have the final say with another unconverted try to give them the victory by 32 points to 29.  We did at least secure two league points.

Our Thirds opened their Webb Cup campaign with a home tie against St Senans RFC in Rosbrien last Saturday.  Unfortunately, we came off second best with St Senans winning by 21 points to 7. Hugh Mulcahy scored our only try and Kevin South added the conversion.

Our Under 20’s took on Nenagh Ormond in the final of the North Munster Under 20 League in front of a large crowd of Old Crescent supporters in Thomond Park last Sunday. A dry sunny afternoon, on a firm pitch with a strong wind, boded well for a good game and this is exactly what we got as a very competent Old Crescent side resolutely went about their business in an efficient manner from the off.

Nenagh, playing with the wind advantage in the first half had the better of the early exchanges, getting a foothold in our half, but not too deeply to cause any significant pressure points, in the early exchanges.  Both sides were penalised in the early scrums as each tried to exert dominance. Nenagh had a slight advantage in this area but Crescent’s line-out and maul was very effective and gave us the upper hand for much of the day. Indeed it was the line out which provided the platform for the first score of the day.

Old Crescent stole a Nenagh throw and precision back line play did the rest as Stephen Hackett was able to receive the ball and get outside his man to score out wide on the corner after around 20 minutes. A superb touch line conversion into the wind by Conor Lenihan made it 7-0. We took the game to Nenagh at that point in the game and have a very good spell for the next 10 minutes, after which we scored another try that was very pleasing on the eye, as Val McDermott made an exquisite break through their back line without a hand being laid on him until he crossed the line, again out wide, which this time Conor was unable to convert.

Nenagh needed the next score and they got it with a penalty from the 10 metre line, without having created any significant pressure. Nenagh got the final score of the first half when we were pinged for offside and the resultant penalty was easily slotted to make it a 12-6 game at half time.

A calm team talk at half time and continued focus and effective support play, gave us the upper hand in the early exchanges of the second half and the key first score of the half came our way with an early penalty by Conor Lenihan to give us a 15-6 lead.

This is how it stayed for much of the second half, as each side sought the decisive next score, without either side getting significant scoring opportunities. Our pack continued to compete very effectively as we continued to stretch the Nenagh defence wide.  Midway through the second half, Nenagh coughed up another penalty which Conor Lenihan readily slotted to give us a 18-6 lead.

Nenagh then threw everything they had at us and terrific defence by all concerned, in particular our back row and our centre pairing, meant that our line was not under threat and any penalties resulted in scrums or line-outs from kicks to touch, where we had more than parity and thus were able to hold out comfortably. A last foray down field provided another opportunity and with the backs screaming for the ball with opportunities out wide, Mark Rickard slipped the pillar defence and scored by the posts to give Conor Lenihan the last score of the day with the conversion to lead by 25-6 at the end.

Our Old Crescent Under 20 team has come together nicely over the past few months and have been playing good football and they were able to deal with a strong Nenagh side with a big pack and some strong runners in the back line that were just nullified by a great Old Crescent team effort on the day. Well done to the entire squad and management team, who now concentrate on their play-off game for a place in the All Ireland Under 20 league quarter finals with an away game next week. Thanks also to the large and loud Old Crescent support, which was great to see and hear!

Our Under 20 side are the only Old Crescent side in action next weekend when to travel to Daingan in Co Galway to take on a combined NUIG/Corinthian side at 12.45pm next Saturday.

Finally, we send our congratulations to Richard Maguire, the latest prize winner in the Old Crescent Supporters Car Draw which was held in the clubhouse last Saturday. Thank you, Richard, for your continued support for Old Crescent RFC.