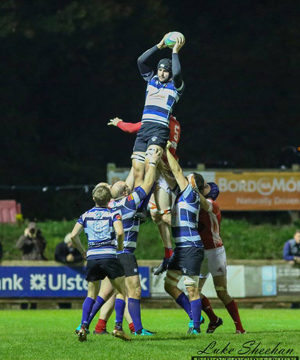 Old Crescent RFC played our first home AIL game of the season against Cashel RFC in Rosbrien last Friday evening, in front of a large crowd of home and visiting supporters. It was our first meeting with Cashel in a good number of years so interest was high and the mood of the home supporters as positive after our win on the road in Belfast the previous weekend.

Showing their experience of playing at this higher level, Cashel were first off the mark with a well worked try after five minutes which they converted. Crescent struck back almost immediately when we were awarded a scrum forth metres out. From the scrum, the ball was moved swiftly along our back line out to our winger Val McDermott, making his first appearance after an injury lay-off, who touched down out wide. Ronan McKenna added the difficult conversion to bring the teams level with ten minutes gone.

The bigger Cashel pack were giving us problems over the next period, and the visitors added a converted penalty and a converted try, to the them ten points clear midway through the first half.

Crescent struck again on the half hour when we gained possession on the half way line and after a series of attacks the ball was moved out to Val McDermott who again beat the covering Cashel defence to touch down under the posts. Ronan McKenna added the easy conversion and we were now just three points behind our visitors as half time approached.

Crescent suffered a severe blow just before the break when we had a player red carded, putting us down to 14 men for the remainder of the game and making our task very difficult.

Despite this setback, we started the second half strongly and we levelled the game again at 17 points apiece when Ronan McKenna was successful with another penalty attempt. Our 14 players fought valiantly and we kept Cashel scoreless for the third quarter of the game. However, the imbalance finally told against us after Cashel had a line out on our ten metre line, they drove to our goal line and were repelled at first but then got in for a try which they converted on 65 minutes.

Crescent continued to take the game to the opposition and we were awarded a penalty which Ronan McKenna converted to narrow our visitor’s lead to just four points with ten minutes remaining. However, Cashel finished strongly in those final ten minutes, scoring two unconverted tries, to leave the final score Old Crescent 20 Cashel 34. It was disappointing to record a loss, our first AIL loss in 20 games, but it shows the task we have ahead in competing at the higher level. A challenge our players are ready and up for!

In fixtures next weekend, our Senior team travels to Cork to take on Dolphin RFC in Irish Independent Park in the All Ireland League on Saturday at 2.30pm, and our Seconds take on the same opposition in the same venue at 5.00pm next Saturday. Our Thirds take on the newly formed Ard Scoil Old Boys RFC in a Gleeson League fixture on the 4G pitch in UL at 2.30pm next Saturday.

Finally, we send our deepest sympathies to the Manning family on the death of our former member and player, Michael ‘Mick’ Manning. Mick had a great rugby career with Old Crescent RFC in the 1950’s and was a regular attendee at all our home games up to recently. Old Crescent RFC members will provide a guard of honour after his 1.00pm funeral mass in St Joseph’s Church on Friday.