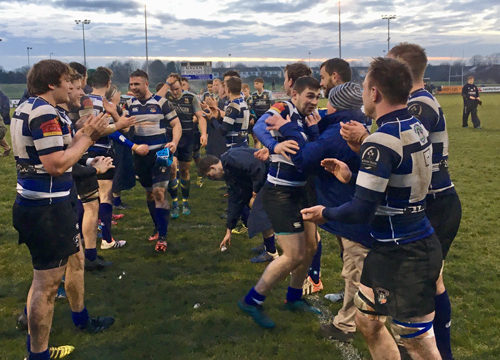 Old Crescent travelled to the Royal County for our return match against Navan RFC last Saturday.  We were expecting a tough game after the close encounter with Navan in Rosbrien the previous week.

We got off to the perfect start when Brendan Guilfoyle held onto an intercept near the half way line and showed a great turn of speed to out pace the Navan cover in the race to the goal line.  Ronan McKenna added the conversion from out wide and we were seven points up after three minutes of play.

The game was evenly matched for the next half hour with both defences holding firm.  Navan converted a penalty attempt on the half hour to bring the score to Navan 3 Old Crescent 7.

In the last play before half time, Crescent launched an attack deep into the Navan 22 and after a few rucks and mauls, Sean Monaghan crashed over the Navan line for a try in the corner.  Ronan was narrowly wide with his conversion attempt, after which the referee blew for half time leaving the score Navan 3 Old Crescent 12.

After the restart, the Navan pack began to dominate in the scrum resulting in several scrum penalties against us which brought the game close to our line.  Navan were awarded a penalty try after the scrum collapsed on our line fifteen minutes into the second half.

The score was now narrowed to Navan 10 Old Crescent 12 making for a nervous last quarter with the local team being urged on by the very vocal home support.  The Navan pressure finally told when they got in for a try to put them in front for the first time with ten minutes remaining.  The conversion attempt was missed but Navan now led by 15 points to 12.

Navan went further ahead a few minutes later when they converted a penalty attempt to extend their lead to six points with five minutes remaining.  However, as in any recent games where we have gone behind, our team didn’t panic and launched attack after attack in the Navan half.  Our efforts were finally rewarded when we successfully mauled the ball to the Navan line and we were awarded a penalty try after Navan collapsed the maul, to put us back in front by one point with two minutes remaining.

We comfortably held on to our lead until the final whistle and indeed we were unlucky not to score a bonus point fourth try just before full time!  Final score Navan 18 Old Crescent 19. Again, our team showed great determination and courage to come from behind and win against one of the toughest teams in our division.  The win keeps our record intact with ten wins from ten UBL games and we look forward to more of the same in 2018!

Our Thirds had another win in the Gleeson League, defeating Richmond by 14 points to 10 in Rosbrien last Saturday. Old Crescent scorers were Robbie Walker (try), Stephan Hackett (try), and Ian McNamara two conversions.  Old Crescent Man of the Match was Darren Shannon

Our traditional Kelly Cup fixture with Young Munster, which normally takes place on St Stephens Day, had been brought forward to next Tuesday evening, 19 December, in Tom Clifford Park with kick off at 7.30pm.

Before that, our Thirds will play their final fixture before Christmas when they take on St Mary’s RFC in a Gleesom League clash at their Grove Island ground at 2.30pm next Saturday.

Finally, we send our congratulations to club member Michael Murphy who became the first Old Crescent winner in the IRFU Your Club Your County Draw in which Michael won a VIP trip to London for the England v Ireland international on St Patricks Day 2018.  In congratulating Michael we also thank all club members and supporters who bought tickets from the club for the IRFU Draw which is an important element of Old Crescent’s fundraising activities.  In the Your Club Your Country Draw, the IRFU puts up valuable prizes and participating clubs are allowed keep all ticket sale proceeds to help fund club activities.  This year Old Crescent ticket sales raised €8,300 which went a long way towards paying for our four overnight trips up North this season.