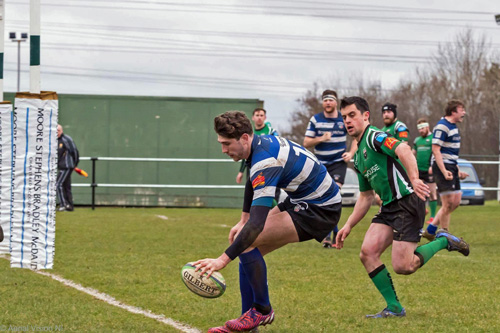 Old Crescent made the long trip to the North last weekend for our furthest away fixture of the season to play City of Derry in the Ulster Bank League.  A few hardy senior members, taking full use of Charlie Haughey’s free travel pass, travelled to Derry from Limerick by train taking a mere ten hours on the Friday before the game!

Crescent had a comfortable win when the teams met last November by 59 points to nil but we were well away that Derry had been undergoing a transformation and hadn’t lost a game since Christmas.  Derry significantly strengthened their team over the Christmas break and only nine of the squad that travelled to Rosbrien last November were still in their squad last weekend. In an interesting commentary on the game today, Derry had an eighteen year old and forty four year old in their pack!

Crescent were slow to settle into the game and the home side were first off the mark with two penalty conversions in the first ten minutes.  However, after that we began to get into the game and put Derry under pressure, and with fifteen minutes gone Larry Hanly burst through some poor tackling to score near the posts.  Shane O’Brien added the conversion to put us in front by 7 points to 6.

Derry went back in front on the half hour with a converted penalty but shortly afterwards Larry Hanly again crossed the Derry line for a well taken try out wide. The convert was missed but we were not back in front in this see saw game.  Our lead was extended a few minutes later when Shane O’Brien again kicked a penalty after a Derry player was sin binned for a dangerous tackle.

However, as half time approached, with Crescent in front by 15 points to 9 and a Derry man in the bin, a few crucial lapses in concentration by Crescent saw Derry score two tries, one converted, before the break leaving us with a disappointing half time score of Derry 21 Old Crescent 15.

Crescent emerged more determined in the second half and eight minutes into the second half Kevin Doyle barged his way over the Derry lien for a try which was converted by Shane again to put us back in front by a point.  Five minutes later, further Crescent pressure created an overlap for our winger Val McDermott to score our fourth bonus point try in the corner. The convert was missed but we now led by 27 points to 21 midway through the second half.

Derry locals said a few months ago this score would have finished off their team but their results since Christmas have given them renewed confidence.  Awarded a penalty with ten minutes remaining, they declined a kick at goal in front of the posts and opted for a scrum from which they pushed over our line for a try.  The try was converted and the home side now led by one point.

Crescent pressed hard for the winning score and we were deep in the Derry 22 for the remainder of the game, but a Crescent turnover and a long relieving kick by Derry into our 22 in the last few minutes made our task more difficult. A final converted penalty for Derry ended the game.  City of Derry 31 Old Crescent 27.

A disappointing result for us but at least we came away with two bonus points and retained our fourth place position in Division 2B.  Next weekend’s game against table toppers Armagh at home in Rosbrien now becomes critically important in our push for promotion.

Fixtures next weekend, our Seniors take on City of Armagh in Rosbrien at 2.30pm next Saturday afternoon.  Places are still available at our popular pre match lunch, which is being kindly sponsored by Holmes O’Malley Sexton Solicitors, please contact Eddy Frost to book your place at 086 3537085.

Our Thirds play UL Bohemians in a friendly in Annacotty at 12.00 noon next Saturday.

Excitement is already building for Munster’s European Cup Home Quarter Final in Thomond Park on 1st April, and Old Crescent RFC is delighted to announce that the club is holding a major pre-match lunch in the Savoy Hotel before the Munster Quarter Final.  The lunch package, including match tickets, is selling fast and anyone interested should contact Liam Keehan on 087 0670609 asap.