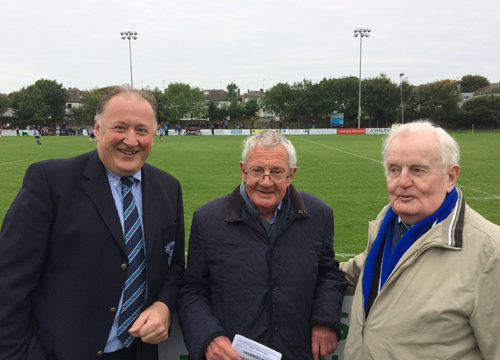 Last Saturday we visited a new rugby venue for Old Crescent when we travelled to North Dublin to take on Skerries RFC in a Ulster Bank League Division 2B clash. Skerries is a beautiful seaside town which recently won the national award of Ireland’s Tidies Town, and it certainly looked it’s best on a lovely warm sunny afternoon with a gentle sea breeze.

The game had a late kick off time of 4.00pm before which we had to endure Munster’s defeat in the Aviva on the big screen in a clubhouse full of Leinster supporters.

Both teams showed their intent with running the ball and putting together some good phases in the opening exchanges. With 15 minutes on the clock, we were awarded a penalty which was converted for us by Shane O’Brien.

From the restart, Skerries were guilty of some indecision and from the resulting attack Old Crescent secured the first try of the match by Larry Hanly which was again converted by Shane, leaving the score ten points to nil. Almost from the restart and after some good play by Crescent’s, our Captain, Cathal O’Reilly crossed the white wash for second try for Old Crescent.  The conversion attempt was just wide but we were now looking good leading by 17 point to nil twenty minutes into the game.

Skerries regrouped and had some chances to reduce the score but were thwarted by good defence from Crescent. With five minutes to go before half time, Skerries were awarded a penalty which was converted to give them their first points on the score board. This score seemed to fire Skerries into action and after some pressure they scored a try in the corner just before half time.  The convert was missed leaving the half time score, Old Crescent 17 Skerries 8.

Having dominated early on, 17 points to nil after 20 minutes, we were now in a game and Skerries came out fighting in the second half.  Some good work by their pack laid the foundation for a second try for Skerries ten minutes into the second half.  Their try was converted to bring Skerries to within two points of the Crescent score.

Skerries now had their tails up in front of their vocal support  but Old Crescent continued to stifle their attacks with some good defending. Skerries were camped on the Crescent line for a long period and a try looked imminent, but we stole the ball and Larry Hanly launched a 70 metre kick ahead and run down the field to the Skerries line. Larry won the race to the ball but was very unlucky to knock on at the line.

Having survived this onslaught, Skerries began to make more inroads into the Crescent defence as we approached the midway point in the second half. With some good inter plays and offloads between their backs and forwards, Skerries got their third try which the67y converted to now take the lead for the first time by 22 points to 17.

Then what should have been the killer blow, Crescent took advantage of a Skerries handing error and Brian Touhy raced unopposed to the posts. Barry Neville added the simple conversion and we now went 30 points to 22 ahead with five minutes left.

However, Skerries didn’t give up and sustained pressure brought then into our 22.  We stopped a Skerries maul short of our line but we were penalised and suffered a yellow card. From the resulting line out and maul, Skerries got over our line for their fourth try. The conversion was missed leaving us 30 – 27 ahead with two minutes remaining.

Skerries continued to attack and edged their way towards the Crescent line. Continued last ditch defence by Crescent led to an infringement which gave Skerries a penalty under our posts. With Crescent down to 14 men, Skerries went for the win and turned down the easy chance to draw the game. They took a quick tap and pounded the Crescent line but were unable to make the break through. The final play ended with Crescent securing a turnover and a penalty. Larry Hanly kicked the ball out of play to give us a narrow but well deserved win on the road.

Old Crescent Thirds created a little bit of history with a classic victory over Thomond in the Gleeson League playing with a depleted side on Saturday in Rosbrien. Playing with a pack sprinkled with front rows and elusive backs, Crescent surprised their more vaunted opponents winning 29-24 in an entertaining contest to start their Gleeson league off on a winning note. Scorers for Crescent were Josh Page 2 tries, Mathew Hanley try, Nigel Kerr try, and Jack Broderick three converts and one penalty.