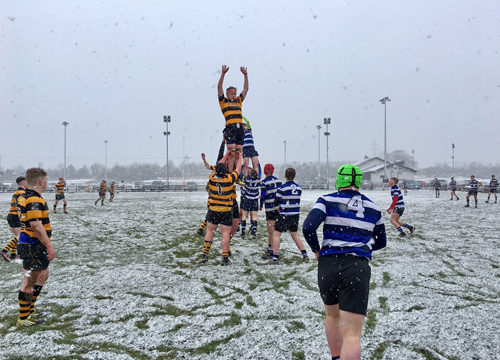 Old Crescent RFC V Young Munster, Under 18 Friendly, last Sunday morning in Rosbrien. Could have done with a yellow Ball!

Storm Emma knocked the Ulster Bank League out of kilter and our away game against Wanderers, originally fixed for Saturday, 3rd March, on the Aviva Stadium back pitch, was eventually played last Sunday in the Wanderers club grounds on Merrion Road.  Crescent were happy to play on the grass in Merrion Rd as we dislike playing on the old artificial back pitch in Aviva, which in any case is due to be taken up and re-laid this summer.

The game was played before a good attendance of our Dublin supporters and our travelling Limerick support, to such an extent that we probably had more support at the game than the home team.  Our games with Wanderers are always tight affairs and hard fought, having played each other six times in the AIL and won three games apiece, and this game was no exception.

Wanderers set out their stall early and were first on the scoreboard with a converted try after five minutes. However, Crescent quickly rallied and five minutes later we levelled the scores when our rolling maul powered over the Wanderers line. Liam McMahon was credited with the touch down and Ronan McKenna added the conversion.

Midway through the first half, we were attacking on the Wanderers 22 when Seaghan Gleeson offloaded a lovely ball out of a tackle to Gary Fitzgerald who scarpered along the left hand touchline to beat the cover and touch down out wide. Ronal was narrowly wide with the conversion attempt

The game was fairly even as we approached the break but we had one more move up our sleeve.  We were again on the attack in the Wanderers half and after a series of rucks and mauls we moved the ball out wide to the right hand touch line where Gary Fitzgerald was again on hand to finish the move by rounding the cover and touching down under the posts.  Ronan added the easy conversion to put us 19 points to 7 ahead at half time.

The second half was again evenly contested but we were able to deal with whatever Wanderers threw at us. Midway through the second half we were attacking in the Wanderers half where Val McDermott finished off a back line move by collecting his delicate chip over the Wanderers cover and touching down for our fourth bonus point try.  Ronan added the conversion to put us 26 points to 7 in the clear.

To their credit, Wanderers never gave up and they got in for a consolation try and convert with a few minutes remaining.  However, Ronan McKenna had the last word when he slotted a penalty on full time to leave the final soccer, Wanderers 14 Old Crescent 29.  It was another solid performance by our senior team on the road as we take our unbeaten run to 15 UBL games, a record for Old Crescent RFC!.

Our Third side began their 2018 Webb Cup campaign with a game against Presentation in Rosbrien last Saturday.  Crescent got off to a bright start and we were 12 points to three up after a quarter of an hour, with tries by Killian McMahon and Jaco Jacobs, and one conversion by Ian McNamara.

Presentation replied with a second penalty midway through the first half, and we also added a penalty by Ian McNamara just on half time, to leave the half time score, Old Crescent 15 Presentation 6.

We started the second half in a determined mood and our Graham Brennan got in for an unconverted try five minutes into the half.  We followed this up five minutes later with a try by Stephen Hackett, which Ian McNamara converted to put us 24 points to 6 ahead.  Ian added a successful penalty conversion a few minutes later.

Coming towards the end, Ian added another penalty conversion to take the final soccer to Old Crescent 30 Presentation 6.  A great start to our Third’s Webb Cup campaign!

As excitement build towards Munster’s home European Cup quarterfinal against Toulon, Old Crescent RFC are delighted to announce that we will be holding a major Texas Hold’em Poker Classic on the evening before the Munster game in the Savoy Hotel on Friday, 30th March. Kick off in the Savoy Hotel will be 8.00pm with a guaranteed first prize minimum of €500!  Tickets at €30 are available from any committee member.