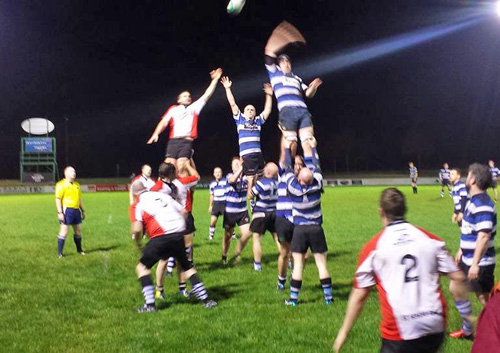 Last Saturday, our Thirds side travelled to West Clare to take on Kilrush RFC in our first Webb Cup game of 2016. The previous weekend our Thirds had welcomed a touring team from Texas to Rosbrien. The students from Rice College in Houston provided an enjoyable game that Old Crescent won well and an opportunity to fine tune our game strategies.

Full of confidence, Old Crescent travelled to Kilrush but we quickly found ourselves 5-0 down after Kilrush ran in an unconverted try. Crescent responded by getting some possession and after working ourselves into the game we were awarded a penalty which was dispatched by Connor Hegerty leaving the score at 5-3.

Crescent now got on top for a spell and after some good work by the forwards, Sean O Dea crossed for a try leaving the half time score at 8-5 to Old Crescent. Our Thirds extended their lead in the 2nd half again through the boot of Connor Hegerty.

Kilrush pushed hard to get back on the score board but were met by resolute defending and were unable to get anything more for their efforts, leaving the final score 11-5 to Old Crescent.

There were some good performances throughout the Old Crescent side with Captain Dave Dennehy and scrum half Dave O’Carroll putting in notable shifts. However, man of the match must go to Odhran Power who rolled back the years and up the sleeves to tackle all around him for 80 minutes.  Next up for our Thirds is a Webb Cup clash against Shannon TBA.

In fixtures next weekend, our Seniors are due to play UCC in our much postponed Munster Senior cup clash with UCC in Rosbrien at 7.30pm on Friday night.  However, there is a doubt about this game going ahead as UCC have lodged an appeal against the Branch decision to award home advantage to Old Crescent.  Check out club website and Facebook page for further details.  Our Under 20’s will taken on Highfield in a Donal Walsh Trophy clash at home in Rosbrien at 2.30pm next Saturday.

All connected with Old Crescent RFC were saddened to learn of the passing of the great Dudley Herbert. A lifelong Old Crescent RFC member, Dudley served the Club as player, coach and committee member. Crescent College Comprehensive also lost a highly respected teacher and rugby coach. Dudley will be remembered fondly as an excellent rugby coach and mentor, and the many messages of sympathy on the Old Crescent Facebook page from around the world are testimony to the affection held for him by players and pupils.

On behalf of our President Ger McNamara and all members of Old Crescent RFC, we would like to extend our deepest sympathies to his wife Jackie, his sons Ruairi and Gavin, his brother Justin and his sisters Niki and Thea..  May he rest in peace.