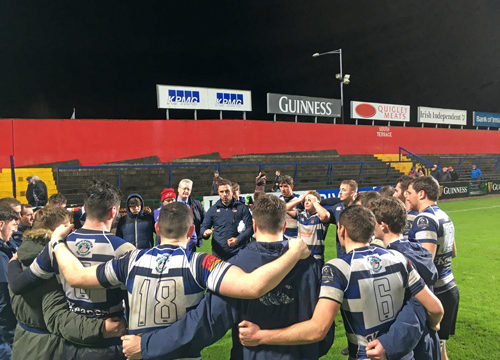 Old Crescent travelled to Irish Independent Park in Cork last Friday evening for the Ulster Bank League Munster derby game against Sundays Well RFC. Our Senior team were ably supported by a full supporter’s bus who made themselves heard on the sideline!

Sundays Well belied their low position in the UBL table by giving Crescent one of the toughest games of the season so far.  The heavy Well pack had Crescent under the cosh for most of the game and Crescent had to defend stoutly for long periods.

However, on the few occasions when Crescent did have the ball we drove deeply into the Well half and forced the home side into conceding penalty opportunities.  Two minutes into the game, Ronan McKenna slotted a penalty attempt and he followed this up with two further penalty conversions midway through the first half.

Despite have little possession, Crescent defended strongly throughout the remainder of the first half.  Sundays Well did convert a penalty attempt just before half time to leave the half time score, Sundays Well 3 Old Crescent 9.

The second half was a repeat of the first with Crescent having to defend for long periods.  While the Well had most of the possession, they seemed bereft of attacking ideas other than continuous pick and drives by their pack which we were able to repel.  They were successful with a penalty attempt 15 minutes into the second half, to narrow the gap to just three points and set up a nervous final 25 minutes.

The game was tantalisingly poised at 6-9 until Old Crescent delivered the decisive blow on 67 minutes to see off the determined challenge of Sunday’s Well.  Larry Hanly burst through the grasping Well defence to touch down near the posts and Ronan added the conversion to put us 10 points clear with just over ten minutes remaining.  Crescent held out to the end of what was one of our toughest games of the season to win by 16 points to 6.
With no other senior teams in action, attention turned to Old Crescent under age action last weekend.  Old Crescent Under 12’s, Under 11’s and Under 10’s mini rugby teams travelled to Dublin last Saturday, first to play Wanderers and then onto the attend the Ireland South Africa match in the Aviva.

The expedition started early in Rosbrien with two buses and a number of cars travelling, and of course the highlight of any trip was the stop in Junction 14 on the way up and down and this trip was no different.

Wanderers had arranged for Lansdowne to come and play our Under 12’s and for Clontarf to play in a blitz with our Under 10’s.  The Under 11’s had Wanderers to themselves who reversed their Jersey to white to play us.

The rugby was fantastic. Our Under 12’s have a strong relationship with Lansdowne as Alan Reddan has a son playing with them and in a great contest, in the last play of the game, Old Crescent scored in the corner to draw the game at four tries a piece.  Congratulations to Tadhg O’Malley and the other U12 coaches who have the team very well prepared this year.

Then on to the match and you know the format.  A burger on Baggot Street, meet at the Beggars Bush to give out tickets and then on to the game.  At the stadium parents were separated from their young and who were left with a few able parents led by John Moroney!  It made for an interesting walk in and out of the stadium. In fairness, they are a really nice bunch of young lads and they were having a ball.  It is a special feeling walking away from Lansdowne Road after a win and Saturday was no different.

We had 121 tickets for the match with 65 children and the rest adults. This made for an interesting logistical exercise.  Thanks very much to Dale Harrow for facilitating the tickets, and to Alan Rodgers and Daragh Kirby who put a lot of time into the admin side. The club made a donation to the cost of the bus which made it easier on all concerned.

It is wonderful to see the young players in the club experiencing a tour, organising themselves, getting a little bit more responsibility. The boys had a ball and the parents enjoyed it too.  We had a few wonderful compliments on our Club which are well deserved.  These days make for great memories.  A fiver to each boy as we arrived back into Junction 14 was the icing on the cake for them!  Thanks to all who travelled.

A final appeal from Dale Harrow for members to return their ‘Your Club Your Country’ tickets to him asap as the IRFU Grand Draw will take place shortly.