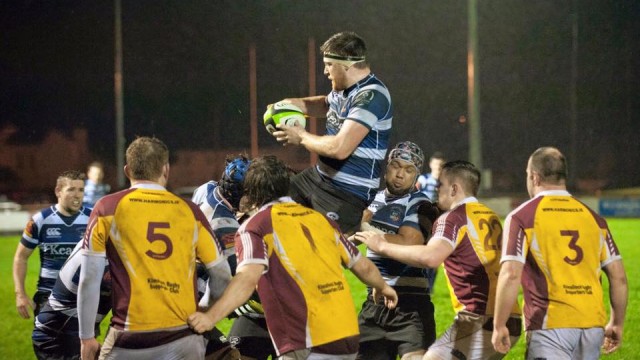 The Old Crescent senior team and supporters made the short trip to Bruff last Friday evening for what was effectively round two of our UBL double header with Bruff RFC, having won the previous round narrowly in Rosbrien the previous Friday.

Crescent started strongly on a perfect night for rugby, a mild evening with no wind or rain unlike the gale conditions the previous weekend.  An early Crescent attack yielded a penalty opportunity which Larry Hanly converted.

Later in the first half, we declined a penalty attempt in favour of a kick to the corner but were unable to make it count with Bruff managing to disrupt our maul.  We did take a penalty attempt as half time approached and Larry kicked it to leave the half time score Bruff 3 Old Crescent 9.

Crescent had been beset with injuries throughout the first half, particularly in the front row, and the many changes upset our rhythm and made us a less effective force in the second half. Bruff began to have the better of the exchanges as the second half went on, and they scored a converted try midway through the second half put them one point in front.

With the game now gone to uncontested scrums, Crescent continued to attack but it was Bruff who were next on the scoreboard with a try with five minutes to go.  Thankfully, the conversion went wide and we stayed within range of a losing bonus point.  We did have a chance to steal the game right at the death but a spilled ball ended our chances.  The final score Bruff 15 Old Crescent 9.  A disappoint result from a Crescent point of view but we still remain at the top of the table.

With our Munster Senior Cup game against UCC postponed this weekend, our Seniors have no game this weekend, and our next senior outing will be our traditional Kelly Cup fixture with Young Munster in Tom Clifford Park at 5.00 pm on St Stephens Day.  This fixture will also double up as the Limerick City Charity Cup Final between the two clubs.