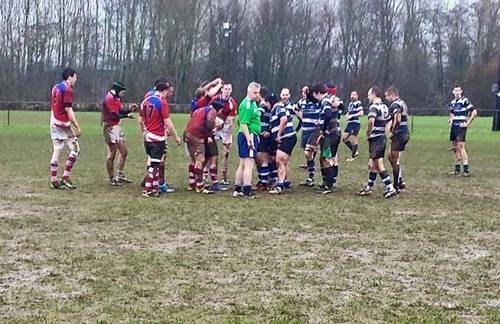 The Old Crescent Thirds side took on UL Bohemians last Saturday morning in Annacotty. It was an entertaining game considering it was played in brutal conditions. First half was back and forth with plenty of kicks and chases from both sides on a day that wasn’t the best for ball handling.

First score came to us when we got close to the Ul Bohs line through our forward’s pick and go’s. Conor Hegarty took the opportunity to take three points with a superb drop kick.  This turned out to be the only score of the first half.

We continued to attack in the second half. A couple of decent mauls by the Old Crescent pack gave us some nice yardage. Meanwhile, our defensive line worked well, with backs and forwards working together and giving away little ground.

We made it over the Ul Bohs line through a number of pick and go’s, only for the referee not to award the try as he couldn’t make out the try line due to the conditions. However, we got back on the offensive straight away and scored a well worked when Ger Horan took a neat pass from Dave O Carroll and drove over the line to touch down. The convert was converted by Conor Hegarty.

Old Crescent Thirds had to withstand a Ul Bohs fightback in the final ten minutes of the game but held on for a well deserved win by ten points to nil.  With the Webb Cup kicking off in a few weeks time, it was good to see some of our ould fella’s, such as Brian Begley, making it back!

Next weekend, our First team travel to Drogheda to take on Boyne RFC in a UBL clash at 2.30pm next Saturday.  It was great to see such a large turnout of our Dublin based supporters in the Aviva two weeks ago for our game against Wanderers, and we again invite our Dublin supporters to join us in Drogheda next Saturday afternoon.

Our Seconds resume their Munster Junior Cup campaign with an away fixture against Richmond RFC at Richmond Park at 2.30pm next Sunday.  We urge all our home supporters to come out on Sunday to support our team in this important MJC match.

We are now just a week away from the Old Crescent RFC / Mid Western Cancer Foundation Fashion Event, in the Strand Hotel Limerick next Thursday, 25th February.  All systems are go for what promises to be one of the Limerick fashion highlights of the year. A limited number of tickets are still available from the organising committee led by Peter Doyle 086 3861054.