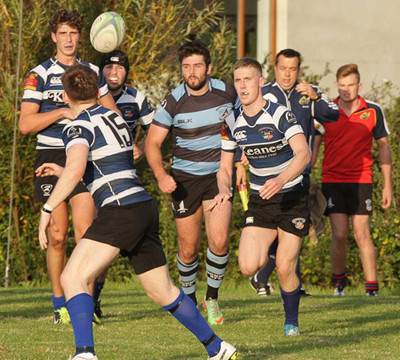 After a successful pre-season build up, Old Crescent RFC opened our Ulster Bank League (UBL) campaign with an away fixture against Tullamore RFC last Saturday afternoon.  This season the UBL is divided into five divisions of ten teams each who will play each other both home and away.  Our UBL campaign this season will therefore consist of 18 games compared to just 15 UBL games last season.

The match was played on a pitch which has been recently re-sodded pitch and had a deep covering of grass which made for difficult conditions underfoot.  Tullamore opened the scoring with a converted penalty three minutes after the kick off.  Crescent narrowly missed a penalty attempt ten minutes later, and the next score 25 minutes into the game was a Tullamore penalty followed by another penalty conversion five minutes later to put the home side nine point in front.

Shane O’Brien was successful with a Crescent penalty about five minutes before half time, and on the stroke of half time Tullamore replied with a fourth penalty to leave the home side 12 point to 3 in front at halt time.  Crescent had played a lot of rugby in the first half but some handling lapses at vital moments meant we had very little to show for it.

The game was evenly balanced for most of the second half, with both sides showing early season nerves, but Crescent did narrow the gap early in the second half with a successful penalty conversion kicked by Shane O’Brien.

The magic moment in the game came with about five minutes remaining, when after Crescent forward pressure brought us to the Tullamore 22, our back line made a decisive break with Brian Toughy sending Kevin Meade clear to cross the Tullamore line for a precious try.  The vital conversion was kicked by Larry Hanly to put us narrowly in front for the first time in the game with a few minutes remaining.  Crescent defended strongly for those last few minutes to secure the narrow win.

Our team’s ‘never say die’ attitude secured us a vital away win when it looked like our only consolation would be a losing bonus.  We now face Navan RFC, who had a big win over Sligo RFC last Saturday, in our first home UBL game of the season in Rosbrien next Saturday.

Our Seconds team took on UL Bohemians in Annacotty in a Transfield Cup clash last Sunday.  20 minutes into the game, Barry Neville kicked a penalty to put Old Crescent in front.  Bohs replied with a converted try 20 minutes later, and they scored a second converted try to put them 14 points to 3 in front. Crescent scored a penalty just on half time to leave the score Ul Bohs 14 Crescent 6 at the break.

Ul Bohs scored a third unconverted try early in the second half to put the 19 point to 6 in front.  This seemed to energise the Old Crescent side who played much better in the second half. Crescent scored a third penalty and followed that up with a converted try scored by Stephen O’Shea, to narrow the gap to just three points.  Crescent pressed hard right to the end and were unlucky not to get over the Ul Bohs line in the last play of the game.

After the win away to Tullamore last weekend, the Old Crescent 1st XV will be looking to make it two wins from two when we entertain Navan this Saturday in our first home Ulster Bank League match this season.

It promises to be a super family day out as Old Crescent RFC pulls out all the stops to ensure our supporters will get to see our UBL match at 4.30pm as well as Ireland’s opening World Cup game versus Canada on big screens in the marquee. The day kicks off with an underage blitz starting at 1 o’clock and there will be hotdogs, burgers and all sorts on offer.

Full program for the day:

2.30pm. Ireland v Canada on TV in the clubhouse and on big screens in marquee

The full list of confirmed fixtures for this weekend for the Club are as follows: 1st XV – Ulster Bank League – Old Crescent vs Navan, Rosbrien at 4.30pm, Saturday, 19th September. 2nd XV – Old Crescent vs Nenagh, away at 1pm on Sunday, 20th September. Under 20 XV will play in the Solomon Frost Festival in Highfield, Cork with the first match kicking off at 11am on Saturday, 19th September.  Our Under 20’s will also play Thomond RFC at home in Rosbrien on Tuesday evening, 22nd September at 7.30pm.