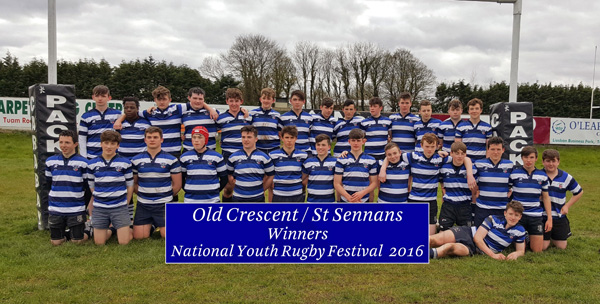 With our senior side resting on their laurels after their comprehensive win over UCC in the Munster Senior Cup and getting ready to face Young Munster in the MSC semi final, the focus in Old Crescent turned to our Under Age players who have very active in recent weeks

For the second year in a row, Old Crescent Under 16’s returned from the Corinthians RFC National Youth Rugby Festival in Galway with silverware.  After winning the Plate competition last year, a combined Under16 Old Crescent RFC/St Senan’s RFC team wanted to go one better and win the Cup competition and after two days of great rugby against U16 teams from all over the country our team succeeded in winning the Cup after a hard fought battle with Clontarf RFC.

Last Saturday, the Old Crescent/St Senan’s team were drawn in a group that included Suttonians, West Offaly, Corinthians and Clanwilliam.  The first match against the recently crowned Under 16 Leinster League Champions, Suttonians, looked like it would the hardest match of the group, however, we were ruthless from the start and scored a try almost immediately.  A shell shocked Suttonians had not recovered from the first try when our combined team went over again. This was the pattern of the game and Old Crescent/St Senan’s managed to rack up an impressive score of 46 points in the short format game time of 24 minutes.  Suttonians managed to get a consolation try at the end of the game to give a final score line of 46-5.

The game against West Offaly had a similar pattern and Old Crescent/St Senan’s ran out 36-0 winners.  The hosts Corinthians also had two wins under their belt so it seemed certain that this match would determine who topped the group.  From the kick off it was clear that Corinthians were determined to put it up to the visitors and they certainly did that in arguably the best match of the weekend.   Neither team managed to score, however, supporters and neutrals didn’t care as both teams gave a masterclass in defensive rugby that was riveting to watch.  The massive effort seemed to have exhausted Corinthians as they fell to a shock defeat against Suttonians which meant that Old Crescent/St Senan’s topped the group and went into Sunday as hot favourites.

An unbeaten Clontarf had managed to get quick revenge on Suttonians after losing to their local rivals in the Leinster league final last week, however, Old Crescent/St Senan’s dominated from the start and secured two superb tries.  It looked like we would cruise to victory but Clontarf scored a try with their first decent piece of possession and the game really came alive as a contest.  Both sides played excellent rugby however Old Crescent scored another try to give us some breathing space.  Clontarf did score a try to make it 17-10 but when Clontarf were rightly penalised in front of the posts the Old Crescent players cleverly elected to take their first kick at goal of the weekend rather than run the ball.  With the successful penalty making the score 20-10, and time running out, Old Crescent/St Senan’s were never going to be caught, in fact, we put the tie beyond question with a final try to win 25-10.

Given that the Old Crescent/St Senan’s squad only had their first training session last Thursday, due to Munster Schools Junior Cup commitments, it was an impressive performance and bodes well for the future.  Congratulations to all involved!

Also, for all you taggers out there, registration goes live at noon next Thursday for the International Pig n Porter Tag Rugby Festival which takes place in Rosbrien on Saturday, 9th July 2016.  Now running for 14 years, the Old Crescent organised Pig n Porter international tag rugby festival has grown to be the largest tag festival in the world and a major annual event in the Limerick sporting and tourism calendar. Register your team for both events at TagRugby.ie.

Members should also get out to Rosbrien to see the transformation taking place in our club grounds, with new pitches being developed on the additional lands we purchased at the end of last year.  Our Grounds Committee have been at full stretch for the last few weeks and it was some sight last week to see up to ten machines working at the same time in grading and levelling the new pitches.

In the only Old Crescent senior fixture next weekend, our Under 20’s will take on Bruff in the North Munster Under 20 Cup at 6.00pm next Sunday on the 4G pitch in UL.