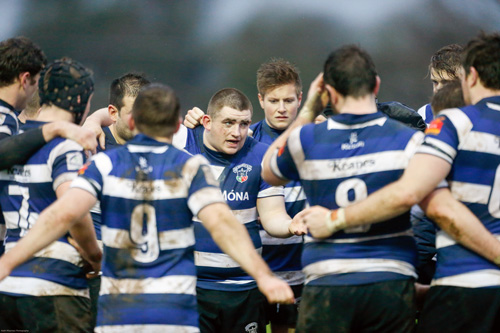 Old Crescent RFC continued on their winning ways in the Ulster Bank League last weekend with another high scoring win, resulting in our senior side clocking up 106 points and 16 tries in our last two UBL games!

Our UBL opponents last Saturday were Sligo RFC who were second from the bottom of the table. However, they had shocked Bruff the previous weekend so our senior team and management were taking nothing for granted.  We started strongly and were over the Sligo line with only two minutes of rugby played.  Crescent mauled the ball over the line from a line out inside the Sligo 22 and Captain Cathal O’Reilly touched down unhindered at the back of the maul.  Larry Hanly added the conversion.

Ten minutes later, Cathal was again to the fore when, again from an attacking position inside the Sligo 22, he swept aside the Sligo defence and crashed over for his seconds try.  Larry again added the conversion.

Crescent continued to have most of the possession and midway through the first half Brendan Guilfoyle broke through some poor tackles and got in for a try, which Larry again converted.  Spurred on by his Captain’s example, Brendan ‘Gillie’ scored again five minutes later to secure our fourth bonus try,  Larry added the conversion  to put us 28 points to nil ahead at half time.

Crescent continued where they left off before the break and were soon on the attack again with our backs getting into the scoring.  Winger Dave Egan made a fine break to touch down for a try shortly after the restart and Larry again added the conversion.

Larry himself got into the action a few minutes later when he scored our 6th try and then added the conversion.  We were now leading by 42 points to nil with over a half an hour of rugby remaining.  It was pleasing to see that Crescent did not take the foot off the pedal and continued to attack even though the game was over as a contest.  Midway through the second half, after a series of powerful Crescent mauls and rucks, Stephen Murphy forged his way over the Sligo line for a try.  This time, Shane O’Brien added the conversion.

With the game well and truly over, Sligo got in for a consolation try which they failed to convert.  However, Crescent were not finished yet and Rory Cunningham scored a super individual try in a race to the corner.  The conversion was missed but Crescent had won by 54 points to 5, scoring eight tries in the process.

We are now six points clear at the top of the UBL Division 2C table, with six games left to play in the league.  At the moment, our senior side are playing a most attractive style of attacking rugby which we must continue to play if we are to achieve our goal of promotion. In that regard, our next UBL game is an important one against Wanderers on the back pitch at the Aviva Stadium at 2.00pm on Saturday, 30th January.

In the meantime, Old Crescent take on Young Munster in the Charity Cup Final at 7.30pm next Thursday evening in Thomond Park.  This match will also double as the traditional Michael Kelly Cup fixture between the two clubs, which normally takes place on St Stephens Day but was called off due to an unplayable pitch.  We call on all Old Crescent supporters to come along to Thomond Park next Thursday evening to support our senior team.