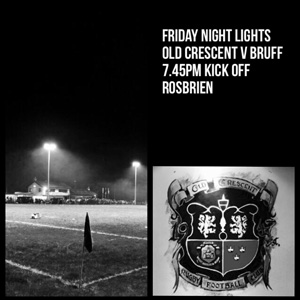 The Old Crescent Senior team made the long trek up north to Dundalk last Saturday to take on the local rugby club in the first UBL fixture between the two clubs.  Even though the clubs are at opposite ends of the UBL Division 2C table, Old Crescent were taking no chances and travelled with a strong squad.

From the kick off we won a line out inside the Dundalk 22 and with good forward pressure Seagan Gleeson broke through and stretched full length for a one handed touch down with less than a minute played.  The convert attempt was missed in the very windy conditions.

Dundalk replied with a successful penalty attempt a few minutes later.  We were soon on the attack again and after some excellent recycling between forwards and backs, Larry Hanly scored out wide and then added the conversion to put us 12 points to 3 in front.

Midway through the first half Dundalk came back at us and some loose Crescent tackling allowed them in for a try which they converted to narrow the gap to two points. Coming up to the half hour Crescent were again on the attack and after a period of sustained pressure, Marty Ryan got in for our third try which Larry Hanly converted.

Larry continued to show excellent form and broke through the porous Dundalk defence to score our fourth try under the posts, and added the conversion, to secure our try bonus point with five minutes of the first half remaining.  With the break coming up Dundalk made one last attack.  Crescent kept them out but did concede a penalty which they converted and we lost a player to the bin.  The half time score was Dundalk 13 Old Crescent 26.

With a sizable lead and the try bonus point secured, Crescent seemed to go off the boil in the second half while the local side appeared to up their game as they sought to get close enough to earn a losing bonus point.  Five minutes into the second half, Dundalk scored a try which they failed to convert in the windy conditions.

Now just 8 points behind Dundalk pressed hard in the second half but the Crescent defence held firm throughout.  With about 15 minutes remaining, Crescent stretched further away when Larry Hanly added to his tally with a penalty conversion.  The visitors held out comfortable to the end, leaving the score at full time, Dundalk 18 Old Crescent 29.  This win and the other results on the day put us five points clear at the top of the table.

Old Crescent Seconds played Garryowen in Dooradoyle on Monday evening in a Munster Senior Seconds League clash. The match was played in very difficult wet and windy conditions which made it tough work for both teams.  We led at half time by 3 points to nil after a Conor Linehan penalty.  Conor doubled our lead in the second half with another penalty.

Garryowen put on the pressure and scored a penalty try following a yellow card and collapsed scrum, but then missed the conversion in front of posts. Soccer skills from Dave Egan out wide led to Paul McNamara scoring a superb Old Crescent try. Linehan added the conversion and sealed the win.  Old Crescent Seconds 13 Garryowen 5.

Old Crescent Thirds travelled the short distance to Tipperary Town on Saturday to play Clanwilliam in their new grounds at Collegelands in the third last round of matches in the Gleeson League. Captained by Dave Dennehy. Crescent put out a youthful backline combined with the experience of Hugh Mulcahy. The pack was brimming with experience, the back row alone boasting 200 Gleeson League caps between them, and it was to these that Crescent turned for leadership and scores.

Odran ‘Oddie’ Power marked an incredible display with a try from forty yards although he claimed it was from half way. The other elder statesman Martin Kelly not to be outdone marked a fine display with a thundering try from 5 yards. Crescent played into a strong wind in the first half and finished the half 27-12 behind although this did not fully reflect the effort put in.

The wind picked up in the second half and Crescent spent the half camped in the Clan 22 and were rewarded with two fine tries. The final scoreline being Clanwilliam 34 Old Crescent 25 All in all a worthy display full of heart and well done to all especially the lads who were putting on the Old Crescent jersey for the first time.

In fixtures next weekend, our Senior team take on Bruff RFC at 7.45pm next Friday evening under lights, in the first of two back to back home and away Friday evening UBL fixtures.  The club will hold a pre match dinner in the clubhouse starting at 6.00pm, dinner bookings for this final home UBL game before Christmas can be made with Eddy Frost 086 353541 or Don O’Malley 087 2596886.

Finally, there has been a very positive reaction to the announcement last week that Old Crescent RFC is purchasing addition land at Rosbrien that will see the club grounds double in size and secure the future of the club for generations to come.  Members and friends of Old Crescent RFC are reminded that they can contribute to the Club’s land purchase fund by contacting any member of the committee.