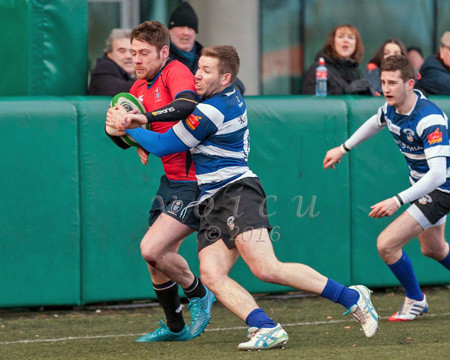 The Old Crescent senior side traveled to Dublin to take on Wanderers in a UBL clash on the G4 back pitch at Aviva Stadium.  It was a cold bitter day with a strong wind sweeping around the stadium which towered over the back pitch.  While our players had trained on the UL G4 pitch in preparation for this game, playing a competitive game on this fast unpredictable surface was very different kettle of fish.

Crescent seemed to adapt fairly well to the new surface in the opening exchanges and we were first to score after twelve minutes play when our full back Kevin Meade burst through and touched down for a try out wide.  The difficult conversion was missed in the swirling wind.  Wanderers were next to score when they converted a penalty midway through the first half.

A few minutes later Wanderers got in for a very controversial try. The try was scored while two balls were on the field which distracted and disrupted the Crescent defence.  Despite Crescent appeals, the referee allowed the score to stand and Wanderers added the conversion to go five points in front.

We were still adjusting to the pace and bounce of the G4 pitch, experience of which was a distinct advantage to the home side as the game wore on.  However, continued Crescent pressure led to our next score when our centre Brian Toughy broke through the Wanderers defense to touch down for a try which Larry Hanly converted.

Crescent were leading by a narrow two point margin as half time approached, but some poor tackling allowed Wanderers in for a second converted try leaving the home side 17 points to 12 in front at the break.

Five minutes into the second half, Wanderers scored another try after winning a kick chase to the Crescent line.  This try was converted to put Wanderers 24 points to 12 in front, to the delight of the home supporters and the frustration of the large gathering of travelling and Dublin based Crescent supporters.

Crescent got right back into the game ten minutes later when our winger Marty Ryan scored a superb individual try out wide, which Larry Hanly converted to narrow the gap to just five points with 25 minutes remaining.

The game was swinging from end to end on the super fast surface and, with both teams having scored three tries, the next score was going to be decisive.  Unfortunately, it was Wanderers who were awarded a penalty try after their maul collapsed over the Crescent line.  The referee initially signaled that the ball was held up and appeared to award an attacking scrum, but instead he yellow carded a Crescent player and awarded Wanderers a penalty try under the posts, to the rage and astonishment of the Crescent supporters.  Wanderers slotted the easy convert to put the home side clearly in front by 31 points to 19.

With time running out, it began to look like Crescent would get nothing from the game but our team never gave up and continued to attack right to the end, and they finally got their reward when our Captain Cathal O’Reilly touched down for a try after a series of rucks and mauls near the Wanderers line.  The convert was missed and the final whistle was blown leaving the final score, Wanderers 31 Old Crescent 24.

While it was disappointing to lose, we secured two precious league points from the encounter, a losing bonus point and a four try bonus point.  With our lead in Division 2C now cut to just three points, it is vital that we get back to our winning ways at home next weekend against Midleton.

After the fiasco that were our arrangements for our Under 20’s last home match against Sunday’s Well, which resulted in a loss we could ill afford, and which has now made the challenge of qualifying for the knock out stages of the All Ireland competition extremely challenging, we took to the field against UCC last Saturday knowing that nothing less than a win was required to keep our season intact.

Whilst little or no rain fell during the game, conditions were tough with cold winds prevailing. UCC kicked off and handed us the initiative when their kicked failed to go the required 10 metres, but if they did, their strong scrum showed itself immediately as they drove us off the first scrum.   From there UCC had a very good opening 20 minutes, in terms of both territory and possession, but they had nothing on the scoreboard to show for it as our defense was superb.

Mid way through the first half, we completed a very solid scrum near half way. Paul McNamara entered the line at terrific pace, stretching the UCC defense, and with Sean Fitzgerald on his shoulder, who in turn off loaded to Conor Lenihan to score out wide – a spectacular score indeed. We were unable to add the conversion. In response, UCC then set up their best attack of the game, with a penalty being kicked into touch inside our 22 metre area, but after some further solid defence, they strived to go wide and a loose pass was intercepted by Dave Garry just inside our 22 metre line and he had the legs to score unopposed at the other end. A conversion to follow gave us a somewhat flattering score of 12- 0 at half time, with the elements in our favour for the second half.

The initial part of the second half was a quieter affair with neither side getting on top. However, our injuries kept mounting with Sean Naughton, having departed in the first half, and he was then followed in the third quarter by a head injury to Stephen Monaghan.  We also lost Sean Hensey and Joe Dole to injury so had to go to uncontested scrums. We welcomed back Eoin Clancy who was returning from a cruciate injury and who shortly after arriving on the field saved an almost certain try through excellent covering. UCC got a somewhat ‘soft’ score through some loose play up the middle to score by the posts, which they readily converted  to make it Old Crescent  12 UCC 7. Despite UCC’s strong scrum and good line out, our own scrum had settled into the game too and our own line out was also working very effectively. We added a penalty through Conor Lenihan to give us a bit of breathing space towards the end. Final result Old Crescent 15 UCC 7.

This was a fine result against a very good UCC team. Our pack put in a great effort, with the backs also being heavily involved throughout the match. Geoffrey Coyne was deservedly ‘Man of the Match’ with some sterling work in the tight and a few magnificent tackles throughout the game, and Andrew Harrison bagged another ‘Biggest Hit’ award.

Fixtures next weekend:  Our Seniors take on Midleton in a vital UBL home game in Rosbrien at 2.30pm next Saturday.  The usual excellent pre match lunch will take place in the clubhouse at 1.00pm, places can be booked with Don O’Malley 087 2596886.  Our Thirds also play next Saturday at noon in a Gleeson League fixture against Abbeyfeale, venue TBC.  Our Seconds will play a friendly against Young Munster at 7.30pm in Rosbrien next Monday evening.

At the Fashion Event launch, Ger McNamara, President of Old Crescent RFC, said “Old Crescent RFC has a long association with the Mid Western Cancer Foundation, and we are delighted to be teaming up with them again to help raise much needed funds for the cancer charity and for club development. Together, we are looking forward to having a superb Fashion Event in the Strand Hotel on the 25th February”.