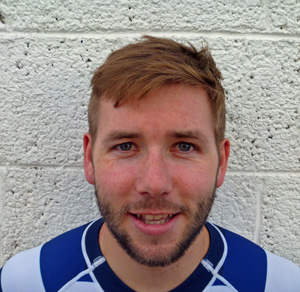 Gareth Quinn McDonagh, Man of the Match in our win over Middleton last Saturday

Our Senior team played a double header fixture against Middleton RFC last Saturday in Middleton.  We were due to play Middleton away in the UBL last Saturday, and also due to make a second journey to Middleton next Saturday to play them in the first round of the Munster Senior Cup.  Thankfully, for our players and our band of travelling supporters, both clubs came to the sensible decision to combine both fixtures into the one game in Middleton last Saturday.

On a perfect day for rugby, Middleton fielded a heavy experienced pack which caused a lot of problems throughout the game for the lighter Old Crescent side.  Middleton were first on the scoreboard with a converted penalty fifteen minutes into the game, and very much against the run of play Crescent levelled the score five minutes later with a converted penalty taken by Larry Hanly.

Middleton continued to dominate for most of the first half and had two further successful penalty attempts to go 9 points to 3 ahead as half time approached.  However, as the first half ended, on one of the few Old Crescent intrusions into the Middleton half, we got a vital score when Brendan Guilfoyle managed to get the ball down on the Middleton line though a melee of bodies that would have needed a TMO to sort out.

Fortunately, the referee was happy that Gillie had grounded the ball and, to the fury of the local support, we were awarded the try.  The convert was missed but we were now just one point behind at the break having been under the cosh for forty minutes.

Middleton continued to dominate in the second half and five minutes into the half they scored a try which they converted to lead by 16 points to 8.  As the game wore on, Crescent supporters would have been hoping for a score to give us at least a losing bonus point, however, our team had other ideas.

With just ten minutes remaining, Crescent were awarded a penalty and kicked for a line out deep into the Middleton 22.  We won the line out and after some initial forward probes, Gareth Quinn McDonagh jinked his way through the Middleton defence to score beside the posts.  Larry Hanly kicked the conversion to bring us to within a point of the home side.

By now the Middleton pack were beginning to tire and Crescent were playing with renewed energy and pressing for a win.  With five minutes remaining, Crescent were awarded a long range penalty out wide just inside the Middleton half.  Substitute number 10, Barry Neville, coolly stepped up and converted the difficult kick to put us in front for the first time in the match with a few minutes remaining.

However, as we headed towards the final whistle, Old Crescent didn’t just sit back and try to defend our narrow lead but continued to attack around the Middleton 22.  Their efforts were rewarded when Gareth once again jinked his way through the tiring Middleton defence and touched down for his second try.  Barry kicked the conversion to deny Middleton a losing bonus point and give us an important away win by 25 points to 16, a victory that for most of the match seemed unattainable.

Old Crescent was under the cosh for 70 minutes but never gave up and scored 17 points in the last ten minutes, which just goes to show that the show isn’t over until it’s over! Gareth Quinn McDonagh was deservedly selected as Man of the Match for his two superbly taken opportunist tries.

Our Seniors have no game this weekend, having doubled up our UBL and MSC fixtures with Middleton last weekend.  Our Under 20’s take on Garryowen at home in Rosbrien at 2.00pm next Saturday, and our Thirds play St Senan’s next Tuesday evening at 7.30pm under lights in Rosbrien.