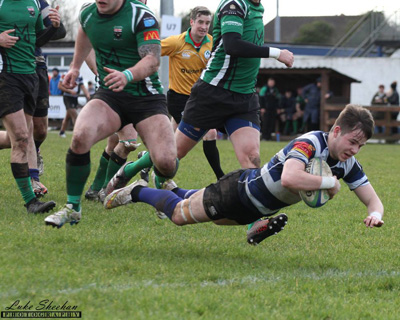 Brian Bennett looks happy as he dots down for our 10th try against City of Derry last Saturday!

Old Crescent RFC took on City of Derry RFC in a top versus bottom Ulster Bank League Division 2B clash in Rosbrien last Saturday afternoon. Such games towards the end of the season can sometimes be a ‘banana skin’ for the top of the table club. Indeed, some older members will remember us doing exactly that in beating Lansdowne in Rosbrien on an Easter Saturday when they had gone through the season unbeaten and we were at the bottom of the then Division Two.

However, there were no banana skins to be seen in Rosbrian last Saturday where our dominance was such that we notched up a record score and made sporting headlines in the national media.

Taking nothing for granted, Crescent fielded a strong side and started in determined fashion. We were soon on the scoreboard when Brendan Guilfoyle crossed for our first try out wide after seven minutes. Ronan McKenna was just wide with the conversion attempt.

Crescent dominated the early exchanges with the game being played deep in the City of Derry half.  Alex Simpson finished off an attack with a well taken try out wide that any winger would be proud of. Ronan McKenna added the conversion.  A few minutes later, Brendan Guilfoyle burst through some poor tackling to score his second try which Ronan converted to put us 19 points to nil in front midway through the first half.

Crescent continued to attack and from a penalty kick into the City of Derry corner we won the subsequent line out and our pack mauled the ball over the opposition line where Liam McMahon touched down under a pile of bodies for our fourth try.  Ronan McKenna again added the conversion to put us 26 points to nil in front, and our try bonus point secured, after just 30 minutes of rugby.

Crescent were now in full flight and we total dominated the remainder of the first half, scoring four more tries before the break.  Our try scorers in the last ten minutes of the first half were Larry Hanly, Cian Reale, Seaghan Gleeson, and a second try for Liam McMahon.  Ronan McKenna added three conversions to bring the half time score to Old Crescent 52 City of Derry nil.  Eight unanswered tries and six conversions!

Crescent continued to dominate after the break and as the second half wore on the gap in class between top and bottom of our division became ever more apparent.  Our first half try-fest continued and Val McDermott crossed the visitor’s line a few minutes after the restart.  Ronan McKenna added the conversion before handing over the kicking duties to Shane Mullally.

With 15 minutes remaining, the opposition had by now totally crumbled and the only question was what would be our winning margin.  Crescent scored four more tries in the final 15 minutes, with tries by Paul McNamara, a second try for Cian Reale, a third try for Val McDermott, and a final try by Cathal O’Reilly.  Shane Mullally added three more conversions.

At full time, Crescent had racked up a record score of 104 points, 16 tries and 12 conversions, to nil.  While we might have sympathy for City of Derry, we must congratulate our senior team, who could only play what was in front of them on the day, on their magnificent achievement.

Old Crescent Third’s had a great win in a Gleeson League clash against St Marys in Grove Island last Tuesday evening.  Crescent emerged winners from a tough contest by 12 points to 5. The evergreen Bernard Quinn scored two tries for Crescent and Ian McNamara added a conversion.  Dave Dennehy was voted our Man of the Match.

Next weekend being an International weekend, our only fixture is a Third’s friendly against UL Bohemians in Annacotty at 12 noon next Saturday.  Our Senior team are back in Ulster Bank League action the following weekend when we take on Wanderers on the Aviva back pitch on Saturday, 3rd March, at 2.30pm, which will provide an excellent opportunity for our Dublin based supporters to come out and see the attractive brand of rugby being played by our unbeaten team.

Finally, Old Crescent held a very successful Fashion Show last Thursday evening in the Strand Hotel, in association with the Mid West Cancer Foundation, which attracted a large crowd who enjoyed a wonderful evening of fashion and fun.  We thank all those who attended our Fashion Show for their support, it is greatly appreciated by Old Crescent RFC.