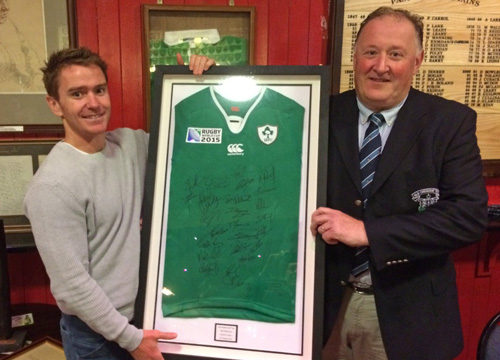 At a ceremony in the Clubhouse, held before the opening Ulster Bank League game against Greystones last Saturday, Pat Monaghan, President of Old Crescent RFC, presented a plaque to Eoin Reddan to mark the award of Honorary Life Membership of Old Crescent RFC in recognition of his outstanding contribution to Irish Rugby over his amateur and professional career.

Presenting the award to Eoin, President Pat said “It’s a privilege to present this award on behalf of Old Crescent RFC to Eoin who reached the pinnacle of modern rugby but never forgot his roots and his association with Old Crescent”

President Pat Monaghan also thanked Eoin Reddan for his gift to Old Crescent of his Rugby World Cup 2015 Irish jersey, signed by all the Irish team, which will be displayed with pride in the clubhouse.

With the formalities over, the Old Crescent senior team took the field, led by Deputy Captain Larry Hanly, for their first competitive fixture in UBL Division 2B against Greystones.  Greystones narrowly missed promotion to 2A last season so we were expecting stern opposition.

Before the game began, the two teams and their supporters observed a minute’s silence in respect of the recent passing of two former Presidents of Old Crescent, Bobby Kennedy and Glenn Quin. May they rest in peace.

The teams were evenly matched in the opening quarter with both having chances.  Old Crescent were first to score when Shane O’Brien slotted a penalty with 15 minutes played.

As expected in the first competitive UBL game of the season, there were many spills, knock-on’s, and missed tackles on both sides. However, Greystones with three pre-season games to our one under their belt were the more composed side as the game progressed.

Greystones broke through to score an unconverted try on thirty minutes, and as the game headed towards half time on a very tight scoreline, they scored again with a converted try to lead by a crucial 12-3 margin at half time.

Crescent continued to take the game to Greystones in the second half but although we came close on several occasions we were unable to make the break through.  Greystones went further ahead ten minutes into the second half with another converted try to extend their lead to 19 points to 3.

Crescent fought hard in the last quarter of the game to get within losing bonus point territory but it was not to be.  Final score Old Crescent 3 Greystones 19. It was a tough day at the office against a good Greystones side but this early disappointment will strengthen our resolve for the rest for the rest of the season.

Tony Ward, former rugby international and rugby commentator attended our game against Greystones last Saturday before going onto the Markets Field for the Limerick FC game.  He had great praise for our young winger, Val McDermott, making his senior UBL debut.  He called Val a “highly promising winger” in his column in the Irish Independent on Tuesday.

On Saturday also, our Thirds took to the field in their first competitive match of the 2016/17 season, a McInerney Cup quarter final clash with Young Munster. Our Thirds were led for the first time by new team Captain, Robbie Walker. We wish Robbie and his teammates the best of luck for the season.

In a close first half, Old Crescent took the lead first through some well struck penalties. Young Munster struck back with a converted try. Crescent immediately responded through some good work by the forward pack which saw Donnacha O Grady eventually dot the ball down.

As the second half began, Old Crescent visibly upped the pace. The forwards were creating space that the backs could capitalise on to put a bit of daylight between the teams to leave the final score at 34-14.

There were good performances throughout our Thirds team, with Joe Fogarty playing well in the forwards, Jack Hogan controlling the game at out-half, and Gordon Cagney working hard in the back line all day.

Next weekend, our senior team play their first away UBL game when we travel to Co Kildare to take on MU Barnhall at 2.30pm next Saturday in Parsonstown.  We expect many of our Dublin based supporters will make the short trip south to support us.  In fact, with Old Crescent playing five UBL games in the Greater Dublin Area during the coming season, we hope to see a lot more of our Dublin based support at these games.

Our Seconds take on Nenagh Ormond in Nenagh at 2.30pm next Sunday in the North Munster Seconds League. Our Under 20’s take part in a Donal Walsh Blitz at UCC’s grounds on the Curaheen Road in Cork at 12.00 noon next Sunday.