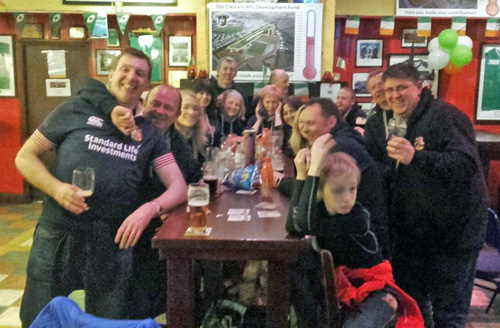 Last week was a quite week for Old Crescent on the senior rugby front with all of our senior teams taking a well earned rest.  However, it was a very active week in the Under Age Section of Old Crescent RFC.

On Sunday, we hosted a blitz at Under 9 level. The event was organised by former senior rugby stars and now under age mentors, Daragh Kirby and David Bowles. Six teams took part and a great morning was had by all involved. After the blitz all returned to the club house where the players and coaches were treated to sandwiches, cakes, etc, prepared by the Old Crescent parents. Well done to Daragh and David and their team.

On Thursday, a highly successful table quiz was held in the clubhouse to raise funds for our Under 12 tour to Salou in Spain in April. It was very well attended and supported. Lots of credit must go to Carmel, Sally, Tracey and Michele. It was great to see the event support by our senior players, including Cathal O’Reilly, Alex Simpson, Luke Malone and their partners. A team including Past President Chris Cullinan and former senior great Stephen Touhy finished a close second.

The quizmaster for the night was Caiman Dolphin who did a great job. Thanks also to Austin O’Neill, John Hassett, and Colm Carr who helped out. A 1980’s disco was held after the quiz which went on into the small hours! Thanks to Anthony O’Dwyer for supplying the food which was prepared by Eileen Noonan and daughter Katy. Liam Noonan decorated the clubhouse with bunting, balloons, etc, which added to the festive atmosphere. Well done to all involved.

Last Saturday, our Under 12’s hosted visitors from Ballyclare RFC in County Antrim. After a great few games of rugby, it was back to the clubhouse for a superb BBQ organised by Eileen Noonan and Brian Nicholas. Liam Noonan looked after the refreshments!

A great evening was had by all. After watching Ireland’s great win on the big screen, presentations were made by both clubs. Ballyclare RFC Under Age Chairman thanked Old Crescent Under Age Section for hosting them and invited us to travel north to Ballyclare in the not to distant future. Replying on behalf of Old Crescent, John Hassett thanked all concerned in organising the visit and said our young players looked forward to visiting Ballyclare in the near future.

Our senior players will be back in action next weekend. Our First team travel to Dublin to take on Wanderers on the back pitch at the Aviva Stadium at 2.30pm next Saturday.  This is a vital Ulster Bank League clash with Wanderers and Old Crescent in third and fourth, respectively, in the Division 2B league table.  Our Thirds resume their Webb Cup campaign with a home fixture against Clanwilliam in Rosbrien at 2.30pm next Saturday.  We ask all supporters not travelling to Dublin for the First team fixture to come out to Rosbrien next Saturday afternoon to support our Thirds.