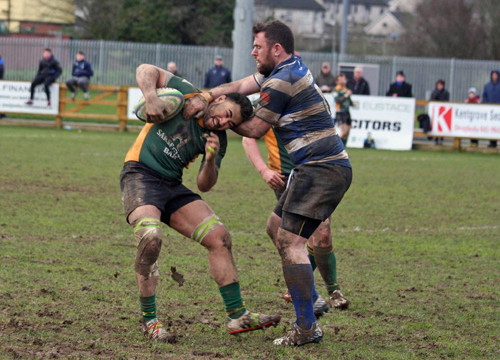 The Old Crescent senior side made the long trip to Drogheda last Saturday to take on Boyne RFC.  After our comprehensive win over Midleton two weeks ago, our senior team were determined to take another positive step forward towards our goal of promotion.  Thankfully, the rain stayed away for the duration of the game although the Boyne pitch was heavy after overnight rain.  There was also a strong cold wind blowing down the pitch which was to Crescent’s advantage in the first half.

With wind advantage, Crescent had the home side pinned down in their own half for the opening quarter and relentless pressure from our forwards and backs led to a try after 17 minutes by Stephen O’Carroll. Shane O’Brien kicked the conversion.

A few minutes later, we were again on the attack and after some crisp passing along our back line, Brian Toughy broke through the stretched Boyne defence to run in unhindered and touch down under the posts. Shane added the easy conversion.

With two tries under our belt in the first twenty minutes, hopes were high among the travelling support for another bonus point win. However, the home side knuckled down to their task and began to get their act together.  On one of their few incursions into the Old Crescent half, they were awarded a penalty which they converted.

Crescent continued to press hard as we approached half time, knowing we were about to lose our wind advantage, and after a series of pick’s and go’s deep in the Boyne 22, our Captain Cathal O’Reilly crashed over the Boyne line to score our third try.  Shane again made sure of the conversion, which left the half time score Boyne 3 Old Crescent 21.

Crescent had to play a different game into the near gale force wind in the second half.  We had to keep the ball in hand as we tried to make ground into the Boyne half, and any handling errors and infringements were punished severely by clearing kicks that took us back to where we had started and beyond.

Boyne added another penalty conversion shortly after the restart as they began to make use of the wind to keep us deep in our own half.  Our cause wasn’t helped by having two of our players in the bin on separate occasions in the second half.  On the other hand, our defence was excellent and well organised and Boyne never looked like getting across our line.

With ten minutes remaining, Boyne converted their third penalty to bring the score to Boyne 9 Old Crescent 21.  We did have one last chance to get that elusive fourth try when we attacked deep into the Boyne 22 in the last few minutes but the move broke down and the referee called a halt to proceedings.  It was a solid win on the road and any disappointment at not getting a bonus point was soon dispelled when we heard the result of the drawn Navan v Tullamore game.

Our Munster Junior Cup side were in action last Sunday against Richmond on the canal bank. The game went ahead after a morning pitch inspection, although it is questionable whether it should have gone ahead on a pitch that was an absolute quagmire which made for almost impossible playing conditions.

Crescent played into the strong wind in the first half but were first to score after 15 minutes when our backs broke out of our 22 and after some slick passing finished the move with Paul McNamara touching down under the Richmond posts.  Padraig Quinn added the conversion.

Crescent were under pressure from the much heavier Richmond pack and after a number of scrum infringements, Richmond went ahead with three converted penalties scored within minutes of each other.

The decisive blow was struck by Richmond when they were awarded a penalty and took a quick tap on our 22.  The tap was taken behind the referee’s back but he allowed play to continue and Richmond scored unopposed in the corner as Crescent waited in vain for the referee to call back play. The difficult sideline conversion was successfully kicked to leave the half time score Richmond 16 Old Crescent 7.

Crescent had the wind at our back in the second half but try as we might we could not get through the dogged Richmond defence, even though our gallant team gave it everything and never gave up.  However, we did deny Richmond any further scores and in fact there were no scores in the second half.  We would have given Richmond a much better game on a dry pitch but it was not to be.  Final score Richmond 16 Old Crescent 7.

The only senior fixture down for next weekend at this stage is our eagerly awaited second round Munster Senior Cup clash with UCC in the Mardyke at 2.30pm next Saturday.  We expect to see a large number of travelling Old Crescent supporters in the Mardyke next Saturday afternoon.