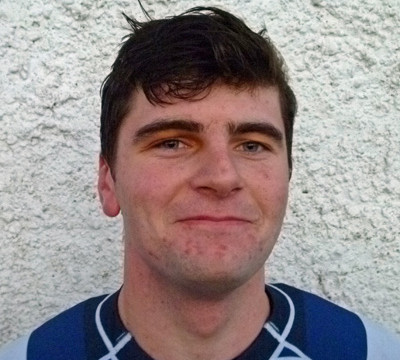 Pictured is No 7, Cian Reale, voted Man of the Match in our win over Navan in Rosbrien last Saturday

Our first home UBL game of the season took place in Rosbrien last Saturday when we hosted Navan RFC.  With our new entrance nearing completion, the club grounds never looked better thanks to the hard work over the summer of our grounds committee led by Dermot McGovern.

With our senior team having one of the most successful starts to the season in many years, there was a festival atmosphere in Rosbrien last Saturday. An under age blitz took place before the Ireland Canada game was shown in the clubhouse and this was followed by the late kick off of our UBL game. Navan had a big home win in their opening UBL game a week ago, beating Sligo by 54 points to 10, so we were expecting a stiff contest.

Both sides traded penalties in the first few minutes, Crescent’s kicked by Larry Hanly, before Navan got in for a converted try with 15 minutes gone to go 10-3 in front.  Crescent wasted no time in replying and Brendan Guilfoyle got in for an unconverted try three minutes later.

This was followed on the half hour by another unconverted Crescent try scored by our Captain, Cathal O’Reilly, to put us in front for the first time in the game. There was no further scoring in the first half and Crescent went into the break leading by 13 points to 10.

The early part of the second half was evenly divided with both teams having chances to score. However, relentless pressure by the Crescent pack finally told midway through the second half when Seagan Gleeson crashed over for a try which was converted by Larry Hanly to put Crescent 10 points clear. Crescent went in search of the bonus point try and spent the final ten minutes of the game deep in the Navan half.  With a bit more patience it might have come but it wasn’t to be and Crescent had to settle for a comfortable victory by 20 points to 10.

Our Under 20’s travelled to Cork last Saturday to participate in the inaugural Solomon Frost Under 20 Cup, involving Highfield, Naas and Old Crescent, members of the Frost family being heavily involved in each Club over the years. Old Crescent was ably represented by our Past President Eddie Frost and former captain George Frost.

With each match 20 minutes a side, there was no time to waste in our first game against Highfield. However, against a very big Highfield pack and a lively back line, we struggled to get into the game and were under pressure form the start – in a game with a very large number of scrums, and resets, resulting from errors from both sides, probably reflecting a bit of early season match rustiness, this did not really suit us and gave Highfield the platform to play from and this led to an early score and convert for Highfield to lead by 7-0.

To our credit we improved our performance in the second half and although the game continued to be loose and ragged, we did not secure enough possession or territory. With the final kick of the game, Highfield dropped a goal to secure a 10-0 victory.

In the second game, despite a good start by Highfield who led by 7-0, a lively Naas side  led by their scrum half, who was ultimately the player of the tournament, ripped apart the tiring Highfield team, to set up the third game with ourselves. For this game we were considerably more focussed and our hunger and direction was evident as Andrew Harrison put in a massive hit on the Naas centre (most certainly ‘hit of the tournament) and this energised the team,

Although this match was for some reason only 15 minutes a side, on 10 minutes, Niall Hardiman mauled off a line out drive to score a try, which we were unable to convert. 2 early penalties by Conor Lenihan had us chasing the game to lead by 11-0 (as a victory and scoring more than 19 points would have given us outright victory in the tournament), but despite great breaks by Sean Fitzgerald and Luke O’Connell, we were unable to penetrate their line again and with the shorter game time, the additional score proved elusive, with Naas holding on to lose the game, but win the tournament.  Our thanks go to the Frost family and to host club Highfield for a most enjoyable day’s rugby and for their hospitality in the clubhouse afterwards.

Old Crescent’s Under 20’s continued on their winning ways with a comprehensive win over Thomond in a North Munster Under 20 League clash in Rosbrien last Tuesday evening. We started brightly and the players were clearly intent on showing the management team their much needed improvement in this area after the tournament last weekend. The first declaration of our intent was a break up the centre from Sean Naughton, leading to a try after eight minutes by Val McDemott, converted by Conor Lenihan.  Shortly afterwards a super kick through by Eoin Ryan secured a line out near the Thomond line and with Val entering the line from full back, Conor dotted down, but failed with the conversion, his only miss of the evening when he kicked impeccably.

Shortly after that we had the try of the night. Thomond thought they had cleared their lines, when Val took a quick throw in to himself and then from 40 metres completed a jinking run past 4-5 defenders to score by the posts. Thomond came back into the game for the next 10-15 minutes and although they did not score, due to good defence by Old Crescent.  A further break by Sean led to a try by our new star winger, Gavin Hogan, who bagged another before half time as did Sean.

Thus at half time the contest was effectively over, but our players drove on, with Sean Fitzgerald making a telling break from the restart with good support from Eoin Ryan to secure the first score of the second half. Straight from the kick-off Val ran in almost untouched by the posts and now with an abundance of possession and tired Thomond limbs, Sean Hensey got on the scoreboard after another break by Sean Fitz.

Thomond tried to conjure something tangible and a scrum on our 25 metre line saw their No 8 break off the scrum and score their only try of the night. Following a further quiet period, we finished off the game with two long range tries, the first from Andrew Harrison after a movement started at half way and then our final score of the night coming from Cathal Egan-O’Brien supporting another break from Val.  Gavin Hogan and Sean Naughton were selected as joint Men of the Match for their strong performances in the backline.

Old Crescent RFC’s senior team travels to Kanturk next Saturday for an away UBL game against Kanturk RFC kicking off at 2.30pm.  Old Crescent lost this fixture on a miserable day in Kanturk last year and we will be hoping for a better result this time.  A limited number of seats are available on a bus leaving from the Old Crescent clubhouse at 11.30am sharp next Saturday morning.  Contact Club Secretary Paul Donnellan to book your seat.

In under age news, the annual John O’Riordan Memorial Tournament for Under 11’s will take place next Sunday morning in Rosbrien.