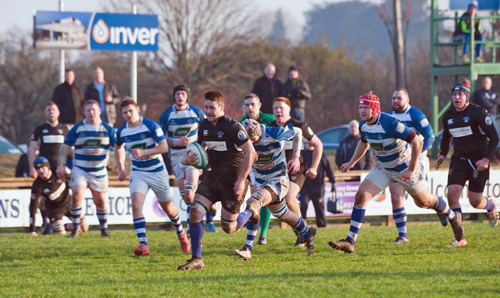 Old Crescent were back in Ulster Bank League action in Rosbrien last Saturday after the long Christmas break when we took on Dungannon RFC.  As mentioned previously, Old Crescent and Dungannon have a friendly relationship stretching back over six decades to 1955 when we first played each other as two clubs who were promoted to senior ranks in 1952.

It was therefore a pleasure to have two members of the first Old Crescent team to play Dungannon in 1955, Gerry Clancy and Mick Manning, as guests of honour at the pre match lunch before the game in Rosbrien last Saturday. Sadly, a third member of the 1955 team who was due to attend the lunch, Jim Roche, passed away suddenly a week ago.

The pre match lunch was kindly sponsored by Conor and Cormac Shields of Shields Dental and Implant Clinic in Limerick, who have strong family connections with Dungannon and Dungannon RFC. Their father Frank who attended last Saturday’s game in Rosbrien is a member of the club and also a dentist in Dungannon.

A minute’s silence was observed before kick off in memory three club members who died recently, Jim Roche, Bobby Mulrooney and Ogie Barrett.  When the game did get underway Dungannon started strongly, determined to make up for their narrow defeat before Christmas when we pipped them at the post with a last minute long range penalty kicked by Shane O’Brien.

The initial flurry by Dungannon was resisted by Crescent and the exchanges became more even.  Dungannon were first on the score board with a converted penalty fifteen minutes into the game.  However, Crescent took the game deep into the Dungannon 22, and after a series of rolling mauls, Brendan Guilfoyle crashed over for Old Crescent’s first try midway through the first half.  The convert from out wide was kicked by Barry Neville.

Dungannon were soon on the attack in this free flowing game and they scored a converted try minutes after our try, putting them back in front by 10 points to 7.  They followed this up with a converted penalty a few minutes later to go 13 points to 7 in front.

In reply, Crescent finished the first half strongly and we scored two tries in quick succession coming to the break, the first by Barry Neville and the second, his second, by Brendan Guilfoyle.  Barry was narrowly wide with his first conversion attempt but successful with his second, leaving Crescent ahead at the break by 19 points to 13.

From the restart Crescent went immediately in search of the bonus point fourth try and we were successful when Brian Touhy crossed the whitewash three minutes into the second half.  The difficult conversion was missed.

Dungannon continued to take the game to Crescent and their efforts were rewarded ten minutes into the second half when they scored a converted try, to narrow the gap to four points, Crescent leading by 24 points to 20.

As the game went into the final quarter, Crescent began to dominate with Brian Touhy scoring his second try and Barry converting midway through the second half.  Dungannon continued to press as the game headed towards full time but the game was put out of their reach when John O’Dwyer burst through the tiring Dungannon defence to touch down under the posts for our sixth try. Barry Neville added the easy conversion to bring the final score to Old Crescent 38 Dungannon 20. It was an excellent performance by our senior side after the long Christmas break.

Our Seconds took on Garryowen in a North Munster Senior Seconds League clash in Rosbrien last Sunday, and we emerged with a comprehensive victory over our near neighbours by 54 points to 5.  Crescent scored eight tries, two tries each by Val McDermott, Denis Kennedy and Josh Fler, and one each by Cathal Monaghan and Peter Hoffman.  Josh added seven conversions.  It was good to see Brian Clancy back in action at nine after his extended parental leave!

In Under Age News, Old Crescent are hosting an under age blitz next Saturday between 12 noon and 2pm with Under 9,10 and 11 teams from Lansdowne and Young Munster taking part, while their senior sides play in Greenfields.

Lansdowne are bringing five teams and we will have the same from Crescent and Young Munster.  Former Old Crescent star, Alan Reddan, will be coaching the Lansdowne Under 11’s, and it promises to be a great occasion with the club house open serving hot dogs, etc. for the duration of the games. Several dads and members are meeting in the club house before travelling to the Old Crescent senior game against Thomond in Fitzgerald Park.

Our Under 9’s and Under 10’s have started 2017 in great form in the sunny January weather. We finished 2016 with blitzes in Newcastlewest and on our own grounds which were a huge success. The skills, tackling, numbers and enthusiasm continues to grow. Thanks to all the parents for their help and continued support!

In senior fixtures next weekend, our First team travel across town to take on Thomond RFC in Fitzgerald Park at 2.30pm next Saturday.  Our Seconds take on Clanwilliam RFC at home in Rosbrien at 2.30pm next Sunday in the Munster Junior Cup.  We urge all Old Crescent supporters to come to these games and support our players.