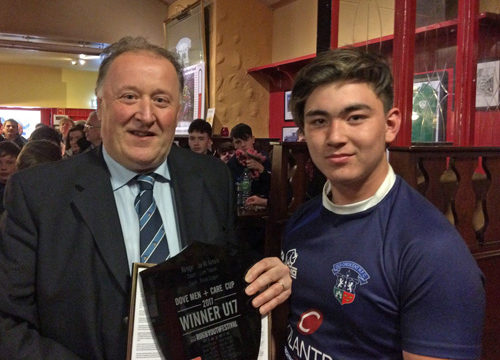 Having secured our place in the Division 2A/2B Promotion Play-Offs by finishing 4th in Division 2B, Old Crescent travelled to Irish Independent Park (IIP) in Cork last Saturday to take on Sundays Well who had finished 9th in Division 2A.   It was a beautiful sunny calm day and the IIP pitch was in excellent condition.  The Crescent supporters travelled in great numbers to support our senior team in this vital knock-out game.

The local side were first to settle in their familiar surroundings and ten minutes into the game, the Well crossed the Crescent line for a try which they converted.  Crescent took the game to the opposition from the restart and an attack deep into the Well 22 ended with a kick through over the line where Sean Monaghan beat the cover to touch down for a try near the touch line. Shane O’Neill was narrowly wide with a conversion attempt.

Sundays Well kicked a penalty conversion midway through the first half to extend their lead to 10 points to 5. However, Crescent went in front for the first time on the half hour when Val McDermott slipped through the Well defence to score under the posts.  Shane O’Neill added the easy conversion.

The Well struck back with another successful penalty to go back in front by a point but Shane restored our narrow lead again with another well taken penalty.  The decisive blow was struck by Crescent as the first half ended, when Val McDermott scored his second try and Shane O’Brien added the conversion.  Crescent led by 22 points to 13 at the break.

The two sides exchanged penalties in the first ten minutes of the second half, Shane adding our points.  We now led by 25 points to 16.  We began to dominate and spend time in the Well half as the game went into the final quarter.  Not that try bonus points were on offer in what was essentially a cup match, but Cathal Monaghan crossed the Sunday Well line for our fourth try on 65 minutes.  Shane again added the conversion to extend our lead to 32 points to 16.

Five minutes later, we were again on the attack and Paul McNamara won his own kick chase to touch down near the posts.  Shane again added the conversion.  Sundays Well got in for a consolation try a few minutes but missed the conversion attempt.

With a few minutes remaining, Crescent closed out the game when our pack took the game to the Sunday Well line where Liam McMahon pounced over for our 6th try.  This time, Barry Neville added the conversion to round off an excellent afternoon in Cork for Old Crescent RFC. Final score: Sunday Well 21 Old Crescent 46.

All focus in Old Crescent now turns to the Division 2A/2B Promotion Play-Off Final when we take on City of Armagh away in Armagh at 2.30pm next Saturday.  The prize on offer is promotion to Division 2A next season. We call on all Old Crescent members and supporters to join us in Armagh next Saturday to support our senior side in this most important game of an already successful season.

To facilitate members and supporters, Old Crescent is organising a supporter’s bus which will leave O’Dwyer’s Bar in Wolfe Tone St at 8.00am sharp next Saturday morning. Cost is €20 per head. Please contact Anthony O’Dwyer asap on 087 2214140 to book your seat as the bus is filling up fast.