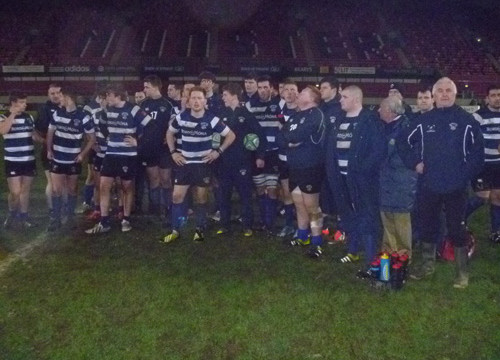 The postponed Limerick Charity Cup Final between Old Crescent RFC and Young Munster RFC was played in Thomond Park last Thursday on a perfect evening for rugby before a good crowd of supporters from both clubs, the gate for which will benefit local charities.  The game also doubled as the traditional fixture between the two clubs for the Michael Kelly Cup which is normally played on St Stephen’s Day.

Currently leading Division 2C by six points, the Old Crescent senior team were looking forward to the opportunity to test themselves against Division 1A opposition.  The first ten minutes were evenly shared as both teams got used to the Thomond Park surface and sought to attack.  Young Munster were first on the scoreboard with a converted penalty after ten minutes.

As the first half progressed, Old Crescent were on the defensive for long periods against a much larger Young Munster pack, and the Greenfield side finally got in for a try with 25 minutes gone.  They added the conversion to go ten points clear.

Crescent didn’t let this upset them and gradually fought their way into the Young Munster half and, with five minutes to go to the break, won a penalty which Larry Hanly kicked into the corner to give us an attacking line out.  We won the ball and after a few pick’s and go’s near the Young Munster line, Brendan Guilfoyle stretched over for a try.  Larry added the conversion and a few minutes later he converted a long range penalty to level the game at 10 points apiece.

Young Munster had a late penalty opportunity but the kick went wide, leaving the sides level at the break after a first half in which Crescent survived the early Young Munster onslaught and fought back to level the game.

Crescent needed to score early in the second half but unfortunately it was Young Munster who went ahead when they kicked a penalty into the corner and after winning the lineout, the heavier Young Munster pack mauled the ball over the Crescent line for an unconverted try.  The exact same was to happen a few minutes later when Young Munster were again successful with a powerful rolling maul over the Crescent line for another unconverted try to put them ten points clear.

Old Crescent suffered another blow midway through the second half when our inspirational lock Brendan Guilfoyle was yellow carded.  Despite the numerical disadvantage, Crescent fought hard and kept Young Munster scoreless for the ten minutes that Gillie was off the field.

However, the energy expended in battling a first division side for seventy minutes finally began to tell and Crescent leaked two further unconverted tries out wide in the last ten minutes to give a final score of Old Crescent 10 Young Munster 30, a score line which didn’t fairly reflect the effort and skill that Crescent had shown throughout the game.  The Crescent senior side can take heart from this strong showing against superior opposition as we focus over our remaining six UBL games on our main goal of promotion.

In another exciting development for 2016, Old Crescent RFC and the Irish Tag Rugby Association (ITRA) have announced that Old Crescent RFC will take over the organisation and running of Tag Rugby in Limerick in association with TagRugby.ie. A Tag Rugby Management Committee has been formed within Old Crescent which will have responsibility for all Tag operations in Limerick including organisation of year-round tag leagues, recruitment of teams, and après-tag social activities.

ITRA, via TagRugby.ie, will continue to provide web registration, training for venue managers and referees, a fixtures and results service on web and tag app, and representative tag opportunities through Regional and International tag events.

The new arrangement will provide Limerick and Mid West tag rugby players with a better overall tag experience by combining Tagrugby.ie’s excellence in logistics with superior local knowledge and experience.

Further details of our exciting plans for 2016 will be announced shortly. In the meantime, you can now sign up for the Spring and Summer Leagues in Limerick at Tagrugby.ie. For more information on the new arrangements for Tag Rugby in Limerick, please contact Eugene O’Riordan, Chairman of Old Crescent RFC Tag Rugby Management Committee, Tel: 087 2337755, Email: [email protected]

In fixtures next weekend, our Thirds resume their Gleeson League campaign with a home game against Richmond at 7.30pm next Friday evening in Rosbrien.  Our Under 20’s will play UCC in a Donal Walsh clash at 2.30pm next Saturday at home in Rosbrien.

Fresh from their Charity Cup endeavours, our seniors travel to Dublin to take on Wanderers on the back pitch in Aviva Stadium at 2.00pm next Saturday, note the early kick off time.  We invite our many Dublin based supporters to join us at the Aviva next Saturday afternoon for what unusually is our only visit to the capital this season.

Finally, Limerick Rose, Rachel O’Neill, is travelling to Belarus with 18 other Roses to work in an orphanage for a week, and she is holding a table quiz in Monaleen GAA club next Friday night at 8.00pm to fund raise for this very worthy cause. All are welcome. Rachel is a sister of Old Crescent senior squad member, Jack O’Neill, and is a regular supporter at Old Crescent RFC senior games.