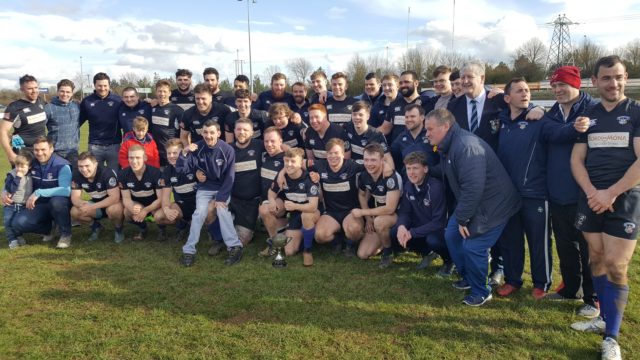 Last Saturday was an important day for Old Crescent RFC with our senior Ulster Bank League fixture against Dungannon RFC and our Second’s playing against Shannon RFC in the Munster Senior League.   A large crowd was in attendance at Rosbrien in anticipation of the home side being crowned UBL Division 2B Champions if we were successful against Dungannon.

Dungannon nearly got off to the perfect start with an intercept and race to the line but luckily their player was hauled down just before he made the line and we managed to clear our lines.  That escape seemed to motivate our team and we began to take the game to Dungannon.  After some brilliant interplay between our backs and forwards, Val McDermott crossed the line after another dazzling run.  Ronan McKenna added the conversion.

A few minutes later, we were again on the attack in the Dungannon half and Brian Touhy ended a more to touch down unhindered out wide.  The conversion attempt was narrowly wide but we now led 12 nil.

Five minutes later, we had our own intercept when Val McDermott pounced on a loose pass and raced away clear to the Dungannon line.  Ronan McKenna added the conversion to put us 19 points to nil in front.

On the half hour, we secured our fourth bonus point try when Larry Hanly broke through the Dungannon defence to touch down out wide.  The conversion was missed but we now led 24 nil. There were no further scores before half time.

The win means that we have won UBL Division 2B with two games to spare after 16 unbeaten games.  The celebrations were muted as the focus turns to completing our 18 game UBL season undefeated, even though we have two tough remaining fixtures against Barnhall and Rainey, lying 3rd and 2nd respectively just behind us in the league.

Old Crescent and Dungannon have a long association going back to the early 1950’s and to mark that connection the clubs have competed for the Eric Shiells Memorial Trophy over the last 40 years.  Eric Shiells was a President of Dungannon, and we were delighted to welcome his son Malcolm to Rosbrien where he presented the Trophy to the Old Crescent Captain, Darragh O’Brien, after the game.

Later on Saturday afternoon in Rosbrien, our Second’s took on Shannon in an important Munster Senior Seconds League clash.   Crescent got off to a bright start when Mark Rickard crashed over the Shannon line.  Brian Bennett was narrowly wide with the conversion attempt but he was on target a short time later with a successful penalty attempt.

Shannon replied with a penalty and there were no further scores before the break, leaving the half time score, Old Crescent 8 Shannon 3.  Crescent continued to dominate after the break and 12 minutes into the second half Jeoff Coyne got in for a try for Old Crescent.  The conversion was missed but we now led by 13 points to 3.

Crescent put the game beyond doubt with a try by Josh Page ten minutes before the end.  The conversion was missed leaving the final score, Old Crescent 18 Shannon 3.  Well done lads!

In another event on a busy day in Rosbrien, at the well attended pre match, Liam Toland presented his Ireland Under 21 jersey to our President Tim Duggan.  Liam has the unique distinction of playing for Ireland at Under 21 level for three successive seasons.  Thank you, Liam, for this valued presentation.