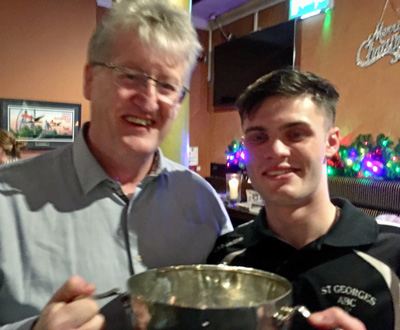 Our picture shows Old Crescent President, Tim Duggan, congratulating 18 year old James McGivern on winning the Ulster Senior Lightweight Boxing title in Belfast last Friday night. Remember the name – James will be representing us in the Olympics in the near future!

Old Crescent completed it’s arduous quartet of away UBL games in the North last Saturday when we played Belfast Harlequins in Belfast. Crescent players and supporters will be delighted to have these long trips under our belt as we face into the rest of the season.  We are also pleased to have won all four away games in the North and earned 19 valuable UBL points out of the maximum of 20 possible in these games.

Our game against Belfast Harlequins brought together the top and bottom clubs in the UBL Division 2B table.  Any complacency that might have been present in the Crescent side was soon knocked out of us by a side that were desperate for points to avoid dropping two divisions in two seasons.

The game started well for Old Crescent when Tavita Tioa made one of his trademark breakouts from a ruck on the Harlequins 22 to score between the posts before the opposition realised what was going on!  Ronan McKenna added the easy conversion to put us 7 points up after 12 minutes.

However, the home side replied a few minutes later with a try which they failed to convert. Midway through the first half, we were again on the attack and Val McDermot made one of his elusive runs to score a try out wide.  Ronan was narrowly wide with the difficult conversion attempt.  The score was now 12 -5 to the visitors.

With 35 minutes gone, we scored again when Brendan ‘Gillie’ Guilfoyle crashed over for a try which Ronan converted to put us 19 points to 5 in front.  We tried to hold this lead into the break but unfortunately Harlequins got in for a try.  The conversion attempt was missed leaving the half time score, Belfast Harlequins 10 Old Crescent 19.

Crescent attacked again after the break , and after a series of rucks and mauls in the Harlequins 22, Darragh O’Brien dived over a ruck to score our 4th bonus point try close to the posts.  Ronan added the conversion to put us comfortably in front by 26 points to 10.

However, if we thought we could sit back with our five point win secured, we got a rude awakening in the final 30 minutes  Harlequins secured a converted try shortly after ours, and followed it up a few minutes later with another converted try, while we had a man in the bin, to narrow the gap to just two points.  Their tails were up and we were struggling to keep them at bay.

The remaining ten minutes were nervous times for the travelling band of Old Crescent supporters, which included watching a Harlequins drop goal attempt shave the posts!  Thankfully, our team held out to the finish to secure a narrow win by 29 points to 27 to complete our 100% successful trips to the North this season.  Next Saturday, we take on Navan RFC at 20.30pm in Rosbrien in the first of two consecutive back to back fixtures with Navan before Christmas.

In fixtures next weekend, our Senior’s take on Navan RFC in the Ulster Bank League at 2.30pm in Rosbrien next Saturday.  This is the last home AIL game before Christmas so we expect a large attendance to support our unbeaten senior team. Our Third’s are away to Newcastlewest at 2.30pm next Saturday, and our Second’s take on Shannon away in Coonagh at 2.30pm next Sunday.

Our traditional Christmas fixture, the Kelly Cup game against Young Munster’s, will take place in Tom Clifford Park on Tuesday evening, 19th December, at 7.30pm.  It has been moved from the traditional St Stephens Day to facilitate players and supporters in the busy Christmas period.