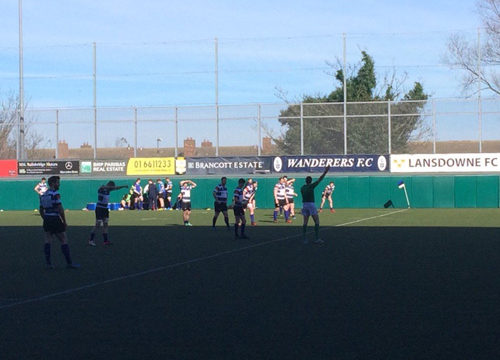 Sunlight and shade on Aviva back pitch last Saturday

The Old Crescent senior side travelled to Dublin last Saturday to take on old rivals Wanderers in a vital Division 2B clash on the back pitch at Aviva Stadium.  Old Crescent supporters traveled in such numbers that the Wanderers President in his opening remarks at the pre match lunch welcomed everyone to the ‘Old Crescent Supporters Lunch’, as the visiting support outnumbered the home supporters!

It was a beautiful sunny day for rugby although the pitch itself was mostly in shade due to the stadium blocking out the sun.  Our players took a while to adjust to playing on the artificial pitch, one side of which was in harsh sunlight with the remainder in dark shade.

Wanderers were first to score seven minutes into the game when they attacked deep into our half and maintained their momentum to maul over for a try which they converted.  Crescent started to get into the game after that setback and took the game into the Wanderers half where they infringed under our pressure and we were awarded a penalty which Shane O’Brien converted from long range after 12 minutes.

We attacked again after the restart and took the game into the Wanderers half where they again infringed and once again Shane O’Brien converted the penalty kick to leave us a point adrift after a quarter of an hour of play.

However, Crescent were not finished and in the last play of the first half we were awarded a penalty which Shane converted to reduce the deficit at half time to four points.  Wanderers 13 Old Crescent 9.

Wanderers extended their lead again with a successful penalty attempt five minutes into the second half.  Crescent continued to take the game to the home side throughout the second half and we were unlucky on a few occasions not to get over the Wanderers line.  However, it was Wanderers who had the last word with a successful penalty attempt ten minutes from the end which deprived us of a precious losing bonus point.  Final score: Wanderers 19 Old Crescent 9.

Our side fought hard but were up against a team able to take advantage of their familiarity with the Aviva back pitch surface, as evidenced by the fact that Wanderers haven’t lost a home UBL game there this season.

Our Thirds took on Clanwilliam in a Web Cup fixture at home in Rosbrien last Saturday.  Crescent came out on top in a closely fought game by 15 points to 10, with our scorers Evan Moloney (try) and Mark Phelan (try, convert and penalty).

In fixtures next weekend, Old Crescent take on Shannon in a North Munster Senior Seconds League home game in Rosbrien at 2.30pm next Sunday afternoon.

Finally, we send our best wishes to the Munster team for a resounding victory over Toulouse next Saturday.  Up Munster!