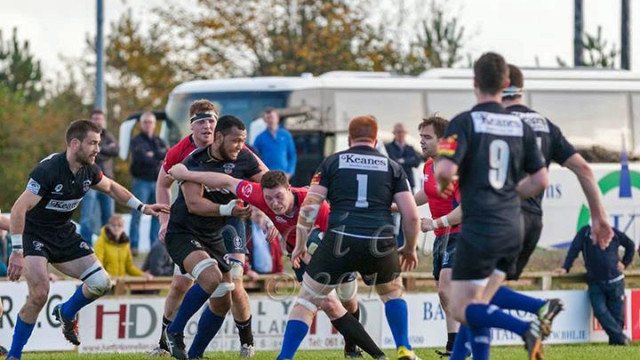 The Old Crescent senior team took on Wanderers from Dublin in a top of the table Division 2C clash in Rosbrien last Saturday.  A large crowd attended this eagerly awaited fixture between first and second in the table on a perfect sunny day for rugby.

Crescent got off to the best of starts when Shane O’Brien touched down for a try with less than a minute on the clock.  Larry Hanly added the conversion.  Crescent continued to apply pressure deep in the Wanderers 22, and following a successful line out the Crescent pack mauled the ball over the Wanderers line where Cathal O’Reilly got the touch down.  The conversion from out wide was missed.

Wanderers finally got on the scoreboard with a converted penalty but it was all Old Crescent in the first half.  The Crescent superiority was shown when the referee awarded us a penalty try after the Wanderers scrum collapsed on their line.  Larry again added the conversion, and with no further scores in the first half, Crescent led by 19 points to 3 at half time.

Having seen our early lead eroded, Crescent finally rallied and after a period of pressure in the Wanderers 22, Larry Hanly scored a 4th try.  The conversion was missed but we now led by 6 points as the game went into the final ten minutes.  It was a time for a stout defence from the home side but unfortunately a late Wanderers surge broke through to score a try near the posts and the successful conversion put them in front for the first time in the game by the narrowest of margins.

Crescent were awarded a penalty in the final minute but the penalty attempt went just outside the posts and the visitors won by a final score of 25 points to 24. As the match report on the Wanderers website said “they held on for their most significant win of the season to date”.

Crescent was left to rue the 10 points left behind by two missed penalties and two missed conversions. We did have the consolation of two bonus points, a four try bonus point and a losing bonus point, but it was a disappointing result for Old Crescent players and supporters. Lets hope we get back to our winning ways when we take on Sligo in Sligo next Saturday.

Our Seconds team took on Bruff in Rosbrien last Sunday in a Munster Senior Seconds League clash, on another beautiful autumn sunny day.   Crescent were awarded a penalty in the first few minutes which Conor Lehihan converted.  Crescent had the best of the early exchanges and we got our reward when Kevin Doyle scored a try which Conor converted.   Padraig Quinn followed this up with an unconverted try on the stroke of half time, putting the home side 12 points to nil in front at the break.

Crescent took complete control of the game in the second half and scored a further five tries, a second try by Kevin Doyle, two tries by Stephen O’Carroll, and tries by Seaghan Gleeson and Stephen Hackett.  Bruff got a single consolation try but were well beaten with the final score Old Crescent 46 Bruff 5.