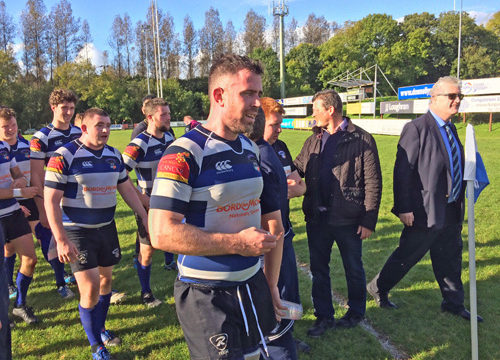 Old Crescent made a second trip up north in as many weeks to take on old rivals Dungannon in the UBL last Saturday. In spite of a threatening forecast, it turned out to be a beautiful sunny day, perfect for running rugby.

The home side started strongly and it took our team a short while to settle into the game.  However, once they did, there was no looking back!  After some super interplay between our backs and forwards, Brendan Guilfoyle crossed the line for our first try after 15 minutes of play and Ronan McKenna added the conversion.

Dungannon secured their only try of the game after half an hour while we were down to 14 men.  As soon as Crescent were restored to 15, we immediately bounced back with a superb try scored by Brian Touhy.  Ronan added the conversion to put us ahead by 14 points to 5 with five minutes to go to half time.

However, Crescent were not finished yet and Brendan Guilfoyle again crossed the line for his second try just before half time.  The referee adjudged Ronan to be wide with his conversion attempt but everyone else in the ground saw the kick as good.  Half time, Dungannon 5 Old Crescent 19.

The Old Crescent team continued where they left off after the break and Brendan crossed for his third try two minutes into the second half.  Ronal was narrowly wide with his conversion attempt.

Two minutes later, Brian Touhy touched down for his second try which Ronan converted to give us a commanding lead of 31 points to 5 with 30 minutes left. Unlike the previous week, when we allowed Barnhall back into the game, this time there was no backing off and we kept the home side scoreless to the end.

With the Old Crescent coaching ticket showing the way with five tries, it was time for a younger player to get on the scoreboard and our substitute hooker Niall Hardiman crossed the Dungannon line for our 6th try, scoring out wide with ten minutes remaining.  The conversion was missed. There were no further scores before the final whistle leaving us convincing winners by 36 points to 5.  The Dungannon club historian said it was our largest winning margin since we began playing them over 60 years ago!

Next Saturday at 2.30pm in Rosbrien, Old Crescent will play Wanderers in what might become one of the most important fixtures of this season’s Division 2B Ulster Bank All Ireland League.

After three rounds of the UBL competition, Wanderers are on 15 points and we are just one point behind. Old Crescent and Wanderers are the only unbeaten teams in our division and both teams have racked up high scores so it promises to be an exciting game of attractive running rugby.  We call on all Old Crescent supporters to come to Rosbrien next Saturday and support your team as they take on the Chaps in this top of the table clash.

As usual we will be having our Pre-Match Lunch @ €25 per person and if you are interested in attending please give Eddie Frost a call 086 3537085 to reserve your seat. It will be a “Full House” so get onto Eddie asap to secure your place.