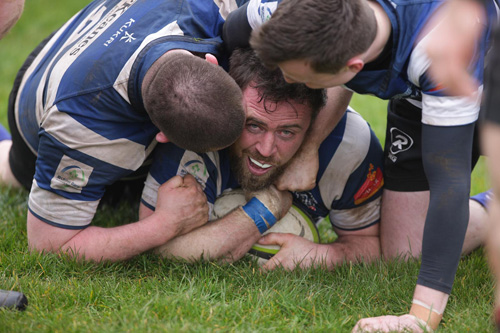 Our senior team were back in action last Saturday when they took on Young Munster in the much delayed Munster Senior Cup Semi Final, on the 4G pitch at UL.  While we had a three week break since winning our UBL Division, Young Munster had the benefit of some very competitive matches during our lay off and it took us a while to get up to the speed of the game.

Young Munster were first to score on the fast artificial surface when they crossed for an unconverted try after 15 minutes. The followed this up on the half hour with a second unconverted try to lead 10 points to nil as we approached half time.

Crescent had our best period of attack towards the end of the first half, and we were very unlucky not to score under the posts when a final pass went astray.  A 10 point to 7 deficit at the break would have been very welcome after a first half in which we were under the cosh for long periods. But it was not to be, and it was our opponents who had the last say before the break when they went down the other end and scored a converted try to lead by 17 points to nil at the break.

Young Munster continued where they left of in the first half and were soon putting us under pressure in our own half.  They scored a converted try five minutes into the second half and followed this up five minutes later with an unconverted try to take their lead to 29 points to nil.

The Young Munster side showed why they had finished in the top four clubs in the UBL this season, and for the first half of the game we were under pressure to compete with a team that is four divisions above us.  However, it is a credit to our senior side that they never gave up, and having settled into the game, they kept Young Munster scoreless for the final half hour of the game and indeed went on to score two excellent tries against such top class opposition.

Midway through the second half, Larry Hanly made one of his decisive breaks and he cut through the Young Munster defence to score a superb try which was converted by Shane O’Brien.  Ten minutes later, Old Crescent were again on the attack and Sean Fitzgerald was at the end of a well constructed maul, and when it was brought down Sean forced his way over for our second try which Shane O’Brien again converted.

Crescent were now in full flight as the game neared the end and we were unlucky not to get in for a third try just before the game ended, with Young Munster the victors by 29 points to 14.  Congratulations to our neighbours on the win and we wish them the best of luck against Cork Con in the MSC Final.  We also congratulate Young Munster on their magnificent win in the Munster Junior Cup last Sunday.

As in our win over UCC in the MSC quarter final, our team selection against Young Munster featured a number of our Under 20 players and they all gave a very good account of themselves against first division opposition. The following Under 20’s players played against Young Munster last Saturday, Val McDermott, Niall Hardiman, Paul McNamara, Cian Reale, and Sean Fitzgerald.  These young players were a welcome addition to our senior squad this season, and they will strengthen the squad as we look to promotion from UBL 2B next season.  Other senior players who had outstanding games last Saturday included Kevin Doyle, John O’Dwyer, Gareth Quinn McDonagh, and Larry Hanly.

As we approach the end of our most successful season in many years, we would like to thank all our rugby management and coaches, and all who assisted them in the club, for their hard work and commitment throughout the season.  We look forward to celebrating our club’s success at all levels on 14th May in the Clarion Hotel when we hold our Annual President’s Awards Night. Tickets are selling fast but some are still available from Tommy Pratt at 086 8213513.

Meanwhile, work continues apace on the development of new pitches on the additional land we bought before Christmas. The pitches have now been seeded, and following the success of our first stone picking party two weeks ago, our grounds committee are holding a second stone picking party next Sunday morning, 8 May, from 10.00am to 1.00pm, to which all members and supporters are invited. Many hands make light work!  Our Under Age End of Season Party and Club Walk also takes place next Sunday in Rosbrien at 12.00 noon. Bring your buckets and shovels!

Finally, in another accolade for Old Crescent RFC, our Senior Vice President, Pat Monaghan, was in Cork last Friday evening to accept the Munster Branch Community Club of the Year Award from Bertie Smith, President of the Munster Branch.  The Award was given in recognition of the club’s work to foster rugby at all levels and for all ages in our community.

Members are reminded that the AGM of Old Crescent RFC will take place in the clubhouse at 8.00pm on Tuesday, 24th May.