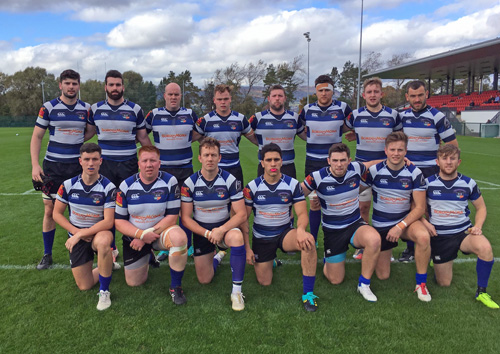 After celebrating a memorable season last year with promotion to AIL Division 2A, and enjoying one of our best summers for years, it was back down to work for Old Crescent RFC in preparation for life in the higher Division.

We began our new AIL season with a trip to Belfast to take on Queens University RFC last Saturday afternoon. We were playing a team who had given the lie to perceptions about college rugby by winning their opening AIL games in the last five seasons!

Old Crescent dominated the opening exchanges and we were rewarded with two quick scores. First, our outhalf Ronan McKenna landed a penalty after six minutes. Then Queens kicked the restart out on the full, and from the resulting scrum, we exploited a huge gap in the students defence and our full back Brian Tuohy coasted over for a try. Ronan was narrowly wide with his conversion attempt.

Queen’s struck back shortly afterwards in their first sustained period in the Old Crescent 22, and they got info for a try which they converted to leave us in front by the narrowest margin after a quarter of an hour of play.

Old Crescent were quickly off the mark after the restart when our pack pushed the home pack off their own ball in their 22 and Kevin Doyle barged over from close range to touch down for our second try.  Ronan added the conversion to put us 21 points to 7 in front after five minutes play in the second half.

Having dominated play for most of the first half and now leading by a comfortable margin, we seemed to relax a bit and let Queens back into the game.  A missed tackle on the half way line allowed Queens to attack deep into our 22 from where they broke through our scrambling defence and scored a try which they converted.  Our lead was now halved with thirty minutes to go and we were put under severe pressure as the students fought hard to extend their run of opening victories in the AIL.

The home side had several chances to get back on terms midway through the second half but our defence held strong.  With ten minutes to go, they did get in for a try out wide.  Thankfully, they were wide with the conversion attempt which would have levelled the game.

The student’s tails were now up with ten minutes left, and the small band of Old Crescent supporters had to endure some nervous moments. We were put under further pressure when we had a man sent to the bin and had to finish the game with 14 men.  However, every Old Crescent player fought manfully in the closing minutes and we finished out the game in the Queens 22 to secure a valuable victory on the road.  Final score, Queens University 19 Old Crescent 21.

We had further good news last Saturday when our Under 20’s travelled to Thurles and beat the local Under 20 side by 34 points to 31 in a North Munster Under 20 League game.

We now look forward to welcoming all our supporters to our first home AIL game next Friday evening when we take on Cashel RFC at 8.00pm in Rosbrien. We will be having our usual pre match meal in the club house before the game at 6.30pm, and bookings can be made with Eddie Frost 086 3537085 asap.