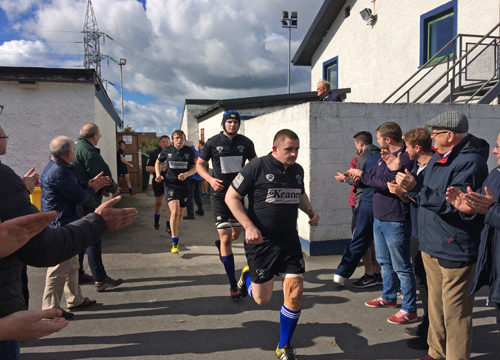 Old Crescent entertained Wanderers in the third round of the Ulster Bank League in Rosbrien last Saturday.  Wanderers came through the Division 2C play-offs at the end of last season to earn promotion to Division 2B along with Old Crescent.  They were the only team to defeat us twice last season so our players didn’t want for motivation and were determined to give a good account of themselves.

Last Saturday was a perfect dry sunny day for rugby and our pitch was in excellent conditions, thanks to the hard work of our grounds chairman, Dermot McGovern, and his team. In what has become a regular feature of Irish rugby, Simon Malone, a former captain of Old Crescent lined out for Wanderers.  Similarly, when we played Barnhall last week our former winger Marty Ryan was on the opposing side.

Crescent started the stronger and had Wanderers under severe pressure from the kick off. We spent the first quarter on the attack deep in the Wanderers half and were justly rewarded when Val McDermott scored out wide at the end of a superb attacking back line movement.  Shane O’Brien added the difficult conversion to put us seven points in front after seven minutes.

Wanderers replied with a converted penalty ten minutes later on one of their rare incursions into the Crescent half.  However, five minutes later, Crescent struck again when Brian Touhy touched down for a try after some wonderful interchanges between our backs and forwards that left the Wanderers defence flatfooted. Shane again added the conversion to bring the score to Old Crescent 14 Wanderers 3.

There were no further scores in the first half and Crescent went into the break comfortably ahead by 14-3.

Crescent were again on the attack in the second half forcing play deep into the Wanderers 22, and we secured our third try when Larry Hanly burst through some weak tackling to score near the posts.  Shane O’Brian again added the conversion to bring the score to Old Crescent 21 Wanderers 3.

With over half an hour remaining, the large and loud Old Crescent support were hoping for a fourth bonus try but it was not to be.  We allowed Wanderers back into the game for a period and they secured two converted penalties in quick succession midway through the second half to narrow the deficit to 12 points.

Crescent stretched the lead again when substitute Barry Neville slotted a long range penalty to bring the score to Old Crescent 24 Wanderers 9 with 15 minutes remaining.  Our team continued to press for the bonus point try, and came close on one or two occasions, but it was Wanderers who had the last word with a consolation try just before time up which they converted to leave the final score Old Crescent 24 Wanderers 16.

Overall, it was a very heartening display by our senior team in front of our loyal supporters, securing four valuable points and leaving our visitors pointless.

Our Second side played Bruff away on Monday evening in the North Munster Seniors Seconds League and came away winners by 19 points to nil.  Captain Kevin Doyle led from the front in a strong team performance. Three tries were scored by Barry Neville, Dara O’Brien and Nigel Kerr, and Barry added two conversions.

Next weekend, our senior team are on the road again to North Dublin to take on Skerries RFC at 4.00pm, note the late kick off time to avoid a clash with the Leinster v Munster game in Aviva.   We again appeal to our Dublin supporters to come out to Skerries to support our team next Saturday afternoon.