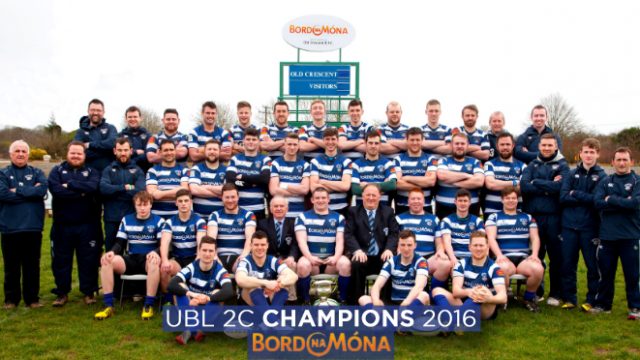 Last Saturday was one of the momentous days in the history of Old Crescent RFC when the club was formally crowned champions of the Ulster Bank League Division 2C.  The day came twenty years after our last All Ireland League triumph when we won Division Two.

Our promotion to Division 2B had been assured with our win over Navan the previous weekend but the icing on the cake was the fantastic display of winning rugby in front of the rapturous home fans in Rosbrien last Saturday.

It was an exciting clash between the top two teams in Division 2c.  Even though our opponents Tullamore were nine points behind us, they still had something to play to secure home advantage in the promotion/relegation stages to come.

Crescent were quickly into their stride and five minutes after kick off Larry Hanly broke through the Tullamore defence and got the ball away to Padraig Quinn who scored in the corner.  Shane O’Brien added the conversion out wide.

Ten minutes into the game, our visitors were awarded a penalty which they converted and a few minutes later they added a second penalty conversion to cut our lead to a single point.

However, our side were on the try hunt again shortly afterwards when No 10 Shane O’Brien kicked into space behind the Tullamore defence.  Larry Hanly secured the ball and following a few rucks and mauls Brendan Guilfoyle touched down and Shane added the conversion to restore our lead to 14 points to 6, midway through the first half.

Crescent now seemed to be on the charge in front of the vocal home support, but Tullamore had other ideas and scored two unconverted tries in quick succession, which put the visitors in front by 16 points to 14 at half time and put a stop to any early Crescent celebrations.

After this wake up call, Crescent were soon on the attack in the second half.  Barry Neville show a quick turn of speed to beat the defence and touch down near the posts.  Shane added the conversion to put us back in front.  Tullamore added a converted penalty soon afterward to keep them in touch just two points behind.

Crescent continued to press forward in the quest our 11th try bonus point of the season and their efforts were rewarded when Brendan ‘Gillie’ Guilfoyle made one of his typical charges and crossed the line for his second try.  Shane again added the conversion to bring the score to Old Crescent 28 Tullamore 19, midway though the second half.

Tullamore needed at least a losing bonus point to hold onto second place in the table and deny Bruff home advantage in the play-off’s.  They converted a penalty to bring them into losing bonus point range but we continued to do our best for our county neighbours.  We seemed to have done enough with a superb drop goal by Shane O’Brien and a converted penalty from beyond the half way line by Barry Neville extended our lead to 12 points with less than five minutes remaining.

However, our visitors showed why they finished second in the table with a late converted try which gave them the losing bonus point guaranteeing them home advantage in the play-off’s.  Final score, Old Crescent 34 Tullamore 29.  Barry Neville was our well deserved Man of the Match.

Celebrations then broke out in earnest on and off the pitch, and continued late into the evening. Our own Ken Lyons, IRFU Committee Member, presented the Ulster Bank League Division 2C trophy and medals to our Captain Cathal O’Reilly and his gallant band of men in front of the largest home crowd of the season.

Our UBL season statistics are worth repeating.  Played 18, won 15, lost 3, 11 try bonus points, 3 losing bonus points, 74 total league points. Points for 562, points against 265, points difference +297.  Ours was the highest points scored by any team across all five sections of the Ulster Bank League.

Our Captain Cathal O’Reilly and every one of the 37 senior players who featured in our UBL campaign this season deserve our thanks and our congratulations, and of course our senior rugby management team, for giving us such wonderfully entertaining rugby throughout the season.

Next weekend, we come back down to earth with an away fixture against UCC in the Munster Senior Cup in the Mardyke at 2.30pn next Saturday.