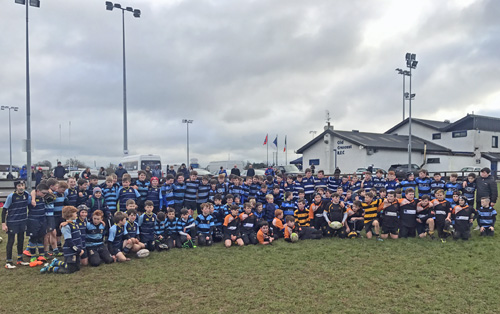 Old Crescent RFC hosted a Under 12 Blitz for Navan RFC Under age on the morning of our UBL game against Navan in Rosbrien.  The Old Crescent and Navan young players were joined by our friends from Shannon and Young Munster for a very enjoyable morning!

There was a festive air among the large crowd gathered in Rosbrien last Saturday afternoon for our final home UBL game before Christmas in which we hosted Navan RFC.  The excitement was added to by a bus load of Navan RFC under age players who had come to play our under age players, a welcome addition to our UBL fixture.

The Navan senior side were lying third in the Division 2B table after a series of wins and came to Rosbrien with high hopes of being the first team to defeat us in the AIL this season.  Our Senior squad were equally determined to finish the first half of the season undefeated.

Crescent had the better start and we were soon deep in the Navan 22 from where, after some very nice interplay between our back and forwards, Brian Touhy burst through the Navan defence to score by the posts.  Ronan McKenna added the conversion to give us an early lead after five minutes.

The game steadied down for the next quarter of an hour before Brian and Ronan game us a repeat performance.  Brian again broke through the visitor’s back line defence to touch down near the posts, and Ronan added the conversion to put us 14 points clear with 25 minutes gone.

Navan came back into the game towards the end of the first half when we we were forced to concede two penalties which they converted to leave the half time score, Old Crescent 14 Navan 6.

Five minutes into the second half Crescent scored the try of the match when we attacked deep into the Navan half. Our pack won the ball and it was moved swiftly out the back line to Shane Mullally who placed a delicate chip over the advancing Navan back line into the in goal area where Val McDermott was first to pounce on the loose ball and touch down for a try near the touchline.  Ronan was narrowly wide with the conversion attempt.

We had now scored three tries and led by 19 points to 6 with 30 minutes remaining.  However, our attempts to add to our try tally were met with a spirited Navan revival midway through the second half which saw them score two converted tries in quick succession and take the lead by the narrowest of margins by 20 points to 19.

We were now fighting to defend our unbeaten record against a fired up Navan side. It was at this stage that our senior side showed their mettle and why they are top of our division.  There was no panic from a team used to winning as Crescent went about the task of regaining the lead, and in the 75th minute Ronan McKenna converted a penalty attempt to put us back in front by two points. Having come from behind in our last two UBL games, we held out comfortable to the final whistle to win by 22 points to 20 against a team that tested us fully.

Our Third’s side had a Gleeson League game against Newcastlewest RFC in the county town last Saturday afternoon, and came away with a comprehensive victory by 45 points to 3. Old Crescent scorers in NCW were Simon Ryan try, Billy Leahy try, Darren Shannon try, Ian McNamara 2 tries, and Evan Moloney 2 tries.  Ian McNamara added five conversions and Sean Naughton was our well deserved Man of the Match.
Our Second side were in action last Sunday afternoon when they took on Shannon RFC in Coonagh in a North Munster Senior Seconds League fixture.  Our lads were quickly off the mark when Jack Broderick scored a try after five minutes.  Jack was narrowly wide with his conversion attempt.  Midway through the first half we were again on the scoreboard when Pieter Homan charged through the Shannon defence to touch down near the posts.  This time Jack added the conversion to put us 12 point to nil in front.

Shannon scored a try on the half hour, which they converted, but we scored again shortly afterwards when Jack Broderick got in for his second try. The convert was missed but we now led by 17 points to 7.  With five minutes remaining in the first half, Shannon scored a converted try again in this free flowing game to cut our lead to three points approaching the break.

However, in a last Crescent attack on 40 minutes, Pieter Homan again forced his way over the line for a try which Jack converted to restore our ten point lead at the break.

We went further ahead after the break when Tom Gormley forced his way over the Shannon line to touch down out wide.  The convert was missed but our lead had now extended to 15 points, Shannon 14 Old Crescent 29.

Shannon had their best period in the final quarter when they scored two tries, one of which they converted, to narrow our lead to just three points with five minutes remaining, making for a hectic finish.  The game was finally put to bed when a skewed Shannon 22 drop out kick went straight to the onrushing Jack Broderick out on the touch line and he had the ball touched down for a try before the home side knew what was happening!  The convert was missed and we finished worthy winners by 34 points to 26.

All in all, it was a very successful weekend for Old Crescent RFC with all three senior sides securing victories.  Our First team continue to top the UBL Division 2B table, our Second team are top of the North Munster Senior Seconds League table, and our Thirds lie third in their Gleeson Teague table.

We travel to Navan next Saturday for our first game in the second half of the UBL season in which the fixtures are played in reverse order from those of the first half. It promises to be another close encounter and kicks off at 2.30pm.  Our Thirds are in Gleeson League action again next Saturday when they take on Richmond at home in Rosbrien at 2.30pm.  Anyone not travelling to Navan should head to Rosbrien next Saturday afternoon if they want to see some entertaining rugby.