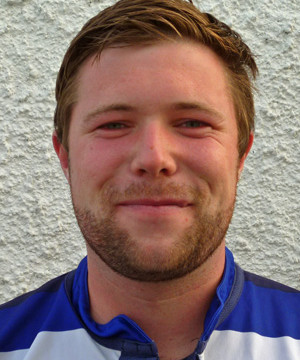 Pictured is Kevin Doyle, Man of the Match in our win over Boyne last Saturday

The Old Crescent RFC senior team continued their winning ways with a comprehensive win over Boyne RFC in Rosbrien last Saturday. Old Crescent top the Division 2C league table and are now the only undefeated team in the Division after securing four wins in the first block of four consecutive matches.

Boyne were first on the scoreboard with a converted penalty after five minutes.  I might add that, thanks to our grounds committee, match scores are now easily read on our scoreboard which has been repositioned to a prominent position on the half way line.

Shortly afterwards Crescent won a penalty in a kickable position but turned it down in favour of a line out in the corner.  Sean Monaghan secured the line out ball and Cathal O’Reilly, at the rear of a well managed maul, touched down for our first try which Larry Hanly converted.

On the quarter hour, our Captain Cathal was again to the fore when he took a quick tap and charged into the Boyne 22 before offloading to Larry Hanly who popped the ball back inside to the supporting Kevin Doyle who scored a try which was then converted by Larry.

Coming up to the half hour, centre Brian Toughy made a superb line break to take us close to the Boyne line.  The ball was recycled quickly and spun out wide to our full back Marty Ryan who scored in the corner.  The convert was missed but we were now three tries up and 19 points to 6 in front.  Boyne landed one more penalty to go into the break 10 points behind.

Crescent immediately set about securing a fourth bonus point try after the restart.  Ten minutes into the second half, Crescent again turned down a kickable penalty in favour of a line out in the corner.  The line out ball was secured and Crescent mauled effectively to the Boyne line enabling Kevin Doyle to crash over for his second try which Larry Hanly again converted.

Crescent continued to dominate the game and five minutes later we secured a fifth try when our winger Nigel Kerr scored in the corner.  The convert was missed but we now led by 31 points to 9 with about twenty minutes to go.  We lost a bit of shape towards the end of the game, as our bench was emptied, and Boyne got in for a consolation try and convert but a Crescent win was never in doubt.  The final score was Old Crescent 31 Boyne 16.

The Crescent team showed admirable confidence and ability in backing themselves by turning down three kickable penalties and securing seven points on each occasion.  Kevin Doyle was the well deserved Man of the Match.

Crescent will now take on Middleton RFC away in Middleton on Saturday, 17th October, in a match of double importance as it will double as a UBL Division 2C league clash and a Munster Senior Cup first round match.  The club will again be running a free supporters bus, details nearer the time.

As mentioned last week, Old Crescent tickets for the IRFU ‘Your Club Your Country’ Grand Draw 2015 are now available from any committee member or from Peter Doyle 086 3861054.  This IRFU Grand Draw is an important fundraising vehicle for affiliated clubs and there are many fabulous prizes.  All the monies raised by Old Crescent RFC through ticket sales go directly to the club so please support generously.