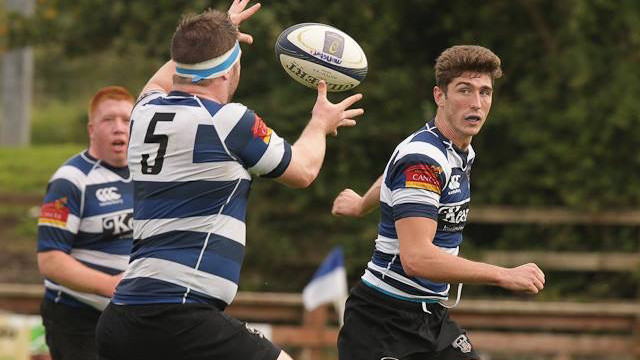 Despite the appalling weather conditions, there was a great atmosphere in Rosbrien last Friday evening for our final home UBL game before Christmas and the first of our back to back UBL games against near rivals Bruff RFC,   A large crowd of supporters braved the elements to cheer on the home side and the visitors.

Playing with a gale force wind and driving rain behind them Bruff were first on the scoreboard with an unconverted try after ten minutes play.  Shortly afterwards the task for Old Crescent got tougher when we were reduced to 14 men by a yellow card.

Bruff applied pressure with the numerical superiority they had in the scrum, and after several difficult scrums near our line, the visitors were awarded a penalty try which they converted to lead by 12 points to nil.

Back up to 15 men, Crescent managed to stem the Bruff onslaught for the rest of the first half and made attacks into the Bruff half against the gale force winds on several occasions.  We finally got on the scoreboard when Larry Hanly was successful with a difficult penalty attempt.  Half time arrived with the visitors leading by 12 points to 3.

With no improvement in the weather conditions, Crescent now had the strong winds behind them for the second half.  The Crescent scrum was also beginning to dominate and their efforts were rewarded with a penalty which Larry converted to close the gap to 6 points five minutes into the second half.

The Crescent forwards were now in full stride and stole two Bruff lineouts in quick succession.  After further pressure, Crescent were awarded a five metre scrum and from the resulting maul. Padraig Monaghan charged over the Bruff line for a try.  The conversion was missed but Crescent were now just a point behind with 20 minutes remaining in the second half.

With time running out, we were awarded a scrum inside the Bruff 22 after a Bruff knock on.  The ball was quickly heeled and Crescent attacked towards Bruff posts, and when the attack was halted the ball was passed back to our number 10, Shane O’Brien who drop kicked the sweetest of drop goals from well outside the Bruff 22 to the delight of the home supporters.

Both teams have to be congratulated for serving up a magnificent game of rugby on a dreadful evening, and we now look forward to the return fixture in Bruff at 8.45pm next Friday evening.

Next Saturday, Old Crescent RFC will be holding a bucket collection in support of the Mid Western Cancer Foundation. Volunteers are needed for Carol Singing in the Crescent Shopping Centre between 10am and 2pm and for a Bucket Collection in the City Centre and at the Milk Market. Volunteers are asked to contact Chris Cullinan at 087 6625938.

The Mid Western Cancer Foundation is very close to the hearts of many of our members, and we especially remember our late club member Dan Gallery who was one of its board members. We in Old Crescent are very happy to support the Charity again this year.

Finally, there has been a very positive reaction to our recent announcement that Old Crescent RFC is purchasing addition land at Rosbrien.  Our President, Ger McNamara, thanks all those who have contributed to our land purchase fund and calls on those who have yet to contribute to please do so as soon as possible. Members and friends of Old Crescent RFC can contribute to the Club’s land purchase fund by contacting any member of the committee.