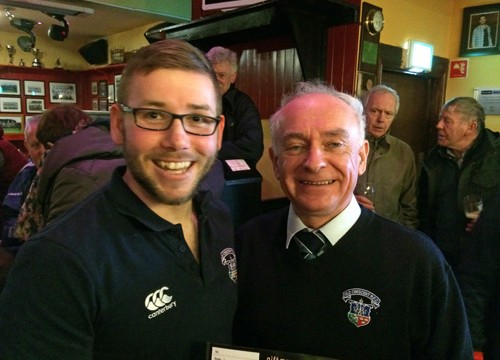 As we come to the business end of the Ulster Bank League, Kanturk RFC made their first official visit to Rosbrien last Saturday for our last but one home UBL fixture of the season.  We were one win apiece in our only two fixtures against Kanturk RFC, both games played in Kanturk, and we were hoping for a better result in Rosbrien.

Kanturk opened the scoring with a converted penalty after less than a minute played. However, Crescent quickly regrouped to take the game to our visitors.  After a series of attacks into the Kanturk 22, we were awarded a scrum in the middle of the field. From the scrum, our scrum half Gareth Quinn McDonagh darted through to score under the posts.  Shane O’Brien added the easy conversion to put us 7-3 in front.

Midway through the first half we were again on the attack, and we went further ahead when Larry Hanly burst through some weak Kanturk tackling to score under the posts.  Shane again added the conversion.

A few minutes later, Kanturk enjoyed a rare period of forward pressure which culminated in they being awarded a penalty try after we were adjudged to have collapsed a maul on our line.  We lost a man to the bin and Kanturk added the conversion.

Playing with a man down, we carried the ball deep into the Kanturk half and our Captain Cathal O’Reilly led by example in forcing his way over the Kanturk line for a try.  Shane again added the conversion to put us 21 points to 10 ahead with ten minutes of the first half remaining.

However, we were not finished yet and with a few minutes of the first half remaining, Brendan ‘Gillie’ Guilfoyle got in on the act with one of his typical tries in the corner.  The sideline conversion was missed but the home supporters were well pleased to have the try bonus point wrapped up before half time.

Old Crescent began the second half in the same determined mood that they had finished the first, and we soon had a 5th try on the scoreboard, this time scored by Sean Monaghan and converted again by Shane O’Brien.

The floodgates opened after that and Crescent went on a rampage against an out classed Kanturk side.  Stephen O’Carroll got in for two winger’s tries a few minutes apart, neither of which were converted.

Kanturk did score an unconverted try midway through the second half, but it was a mere hiccup in the Crescent onslaught which continued to the final whistle.  Crescent added three further tries, scored by Shane O’Brien, Brian Toughy and Paul McNamara, and conversions were added for each by Larry Hanly.

The final score was Old Crescent 64 Kanturk 15.  Crescent scored a total of 10 tries in racking up our highest score this season.  Our positive points difference of 271 points is the largest in all five UBL divisions, a testimony to the attractive brand of attacking rugby our senior side have been playing all season.

Our next UBL outing will be our last away trip to Navan on Saturday, 26th March when we again hope to see our team supported by our growing band of travelling supporters.

In our only senior fixture next weekend, our Thirds begin their Webb Cup campaign with an away fixture against Kilrush RFC in Kilrush at 11.30am next Saturday morning.

Finally, we must thank our hard working Fashion Show Committee for organising our fantastic Fashion Show attended by close on 400 ladies which was held by Old Crescent RFC in association with the Mid West Cancer Foundation in the Strand Hotel recently. Our thanks go to Ita Barrett, Dee Cunningham, Martina McDermott, Yvonne O’Riordan, and Peter Doyle and Liam Keehan.