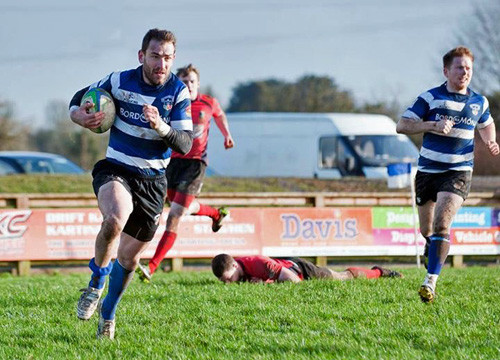 Brian Toughy on his way to one of his hat trick of tries against Midleton last Saturday. Photo Pat Shanahan.

After the loss to Wanderers, it was important that Old Crescent RFC got back on the winning trail in our home game against Midleton RFC last Saturday if we were to maintain our promotion campaign.

After some storms and heavy rains in the preceding days, when it looked like the game might have to be moved, the game against Midleton went ahead in sunshine on a dry but heavy pitch in Rosbrien last Saturday.

Old Crescent started strongly and we were soon attacking deep in the Midleton 22 when the wind was completely taken out of our sails by an intercept by a Midleton centre who raced away the length of the field to touch down unhindered under the posts. The easy conversion was soon added to put the visitors seven points in front with just five minutes gone.

However, our senior side were in no mode to let this minor set back upset them and were soon on the attack again.  After a series of Crescent ruck and mauls the ball was spun out wide, our full back Brian Toughy joined the line and broke through to score in the corner.  The conversion was missed.

After another period of Crescent forward pressure, Sean Monaghan charged into the Midleton 22 and, much like Ginger McLaughlin of yore, crossed the line to score with half the Midleton pack on his back!  Larry Hanly added the conversion to put us in front by 12 points to 5, midway through the first half.

Ten minutes later, not to be outdone, our Captain Cathal O’Reilly did something similar, charging across the Midleton line in a great individual effort that proved unstoppable.  Larry added the conversion.

Midleton were determined to show they had come to play rugby and they put Crescent under pressure for a while with rucks and mauls in our 22 which ended with a Midleton converted try, narrowing the Old Crescent lead again to just five points with eight minutes remaining in the first half.

Larry Hanly wrapped up the first half with a superb individual effort, kicking ahead and gathering his own kick to score our fourth try and then add the conversion.  It was a great team achievement to have the try bonus point secured before half time.  Crescent led at the break by 26 points to 14.

With the wind now behind us in the second half, Crescent started where we left off and were soon on the attack again.  Brian Toughy scored his second try five minutes after the break and this time Shane O’Brien added the conversion.  In what was a free flowing game, Midleton came back at us and got in for a third try but their conversion was missed.  The score was now Old Crescent 33 Midleton 19.

With an hour of rugby gone, Crescent were now in fully flight and Brian Toughy scored his third try to cap a superb individual effort.  Shane O’Brien added the conversion.  The steam was now gone out of Midleton and the last ten minutes were owned by Old Crescent. Marty Ryan showed what a fine finisher he is by forcing his way over for a try in the corner.  Shane added the difficult conversion.

With full time approaching, Crescent continued to press forward against a now very tired Midleton side and Jack O’Neill delivered the coup the grace when he scored our eight try.  Shane was unlucky with the conversion attempt which came back of the posts, after which the referee call a halt to proceeding with Old Crescent securing a comprehensive victory by 52 points to 19, the third time this season that we have scored over 50 points in a UBL game.

The weather played havoc with our other fixtures and the game against Midleton was the only senior game played last weekend.  In fixtures next weekend, our seniors take a break after five weekends of continuous rugby.  Our Thirds will play UL Bohemians away in Annacotty at 11.30am next Saturday morning, and our Seconds play Young Munster next Sunday.

The eagerly awaited Old Crescent RFC / Mid Western Cancer Foundation Fashion Event, which will be held in the Strand Hotel Limerick on Thursday, 25th February, was launched at a well attended reception in the hotel last Monday evening.  All systems are now go to make this one of the Limerick fashion highlights of the year, and tickets are available from the hard working organising committee led by Peter Doyle 086 3861054.

Finally, everyone in Old Crescent RFC would like to send their best wishes to Paul O’Connell on the occasion of his retirement from professional rugby.  Paul has given us all enormous pleasure throughout his long and illustrious career, by his ability and his leadership, and we have taken pride in his many achievements.  We are fortunate to be able to say we play rugby in a city and a province he calls home.