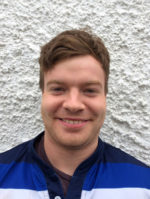 Old Crescent RFC are delighted to announce that Darragh O’Brien has been selected as Club Captain for the coming season.  Darragh is 24 and comes from Castletroy in Limerick.  He played his schools rugby with Castletroy College and his college rugby with UCC, where he recently completed a masters in post primary education and is now a qualified English and History teacher.

Darragh O’Brien joined Old Crescent three years ago and winning the UBL Division 2C with the Club a year ago was the highlight of his time with the Club.  Having just missed out on back to back promotion last season, Darragh is determined that Old Crescent will be pushing hard for promotion to 2A this season.  Best of luck, Darragh!
Tweet