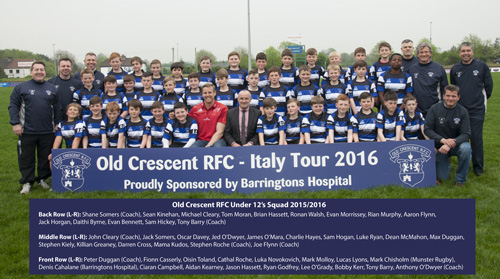 A touring party of 70 players, coaches and parents, from Old Crescent RFC Under 12 squad visited the Northern Italy city of Treviso recently. The Under 12 team took part in the Benetton Treviso Festival of Rugby with over 120 teams competing in the Under 12 age grade. The tournament saw over 8,500 children participate from under 6 to under 14.

The group travelled to Treviso on Thursday May 12th and returned on Sunday May 15th.

The tour was the culmination of over 6 months fundraising by the entire group. The tour gear and team jerseys were sponsored by Barringtons Hospital.

Peter Duggan the Team Manager said “The tour was a fabulous experience for the boys to play together and a fitting end to a great season for this special group of players”.

Denis Cahalane Managing Director of Barringtons Hospital added “These boys are the future both on and off the pitch. We are delighted to be able to support this group and wish them every success going forward”.