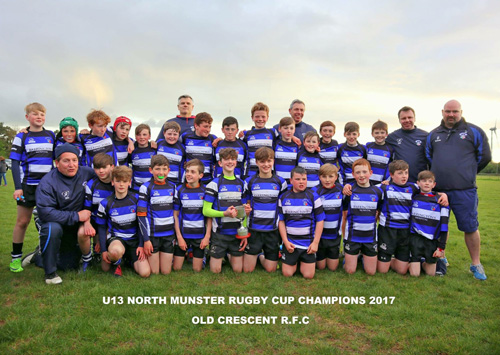 Old Crescent Under 13’s took on Bruff in the North Munster Under 13 Cup in Annacotty last week.  Having lost to Bruff in the League, our Under 13’s were relishing the opportunity to have another crack at their rivals. Bruff got off to the better start and within five minutes we were trailing 10 to nil after they scored a penalty and a converted try.

For the next 45 minutes spectators were treated to a phenomenal game of rugby that had everything and more from both teams. During that period, we scored two unconverted tries to level the game. However, we lost key players in key positions namely our Captain, Oisin Toland, followed by Cathal Roche then Max Duggan followed by Darren Cross and Jack Somers.

Our subs stood up to the plate and indeed all the players who played gave it their all. With seconds left on the clock we were awarded a penalty 20 yards out. Up stands Stephen Kiely to take the kick, you could hear a pin drop as he addressed the ball .He kicked the ball and over it went. The referee blew the final whistle which was drowned out by the roars of excitement from the Old Crescent camp. Our victorious young squad returned to the Old Crescent clubhouse to celebrate with pizza and refreshments kindly supplied by Liam and Eileen.