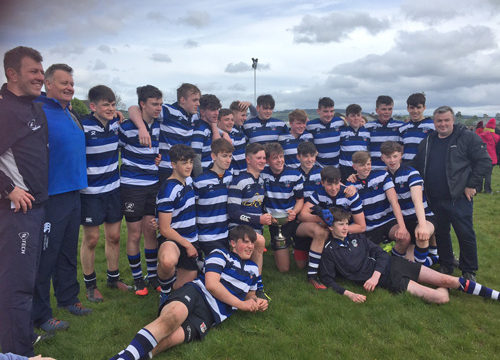 North Munster Under 16 Open Cup Final V Young Munster in Thomond RFC.
Kick-off was delayed by 20 minutes as the Referee’s car had broken down! Young Munster opened very strongly playing into a slight breeze. They applied continuous pressure in the Crescent half, going through many pick and drive phases. Due to some heroic Crescent defending, they were stopped short of the line on a number of occasions. Midway through the half, Ben Davey blocked down then collected the ball inside his own half and sprinted under the posts for a Crescent try against the run of play which he also converted. On the stroke of half time, Munster’s scored an unconverted try in the corner to leave the sides 7-5 at the break.

Gary Kelly at full back was replaced at half time with a knee injury and was followed shortly after by Ben Davey. Despite these setbacks, Crescent completely dominated the second half with some very expansive running from all over the pitch. However we were unable to convert this advantage to scores until the final minute of the match, the only score of the half was an unconverted try in the corner from Ronan Kiely following a back row move.

It was an incredible display of guts and determination from a group of players and subs that refused to ever give up. There was great celebration after the final whistle as this team has been together for a number of years. This was a real squad performance with 24 players used in all the matches on the way to the final.