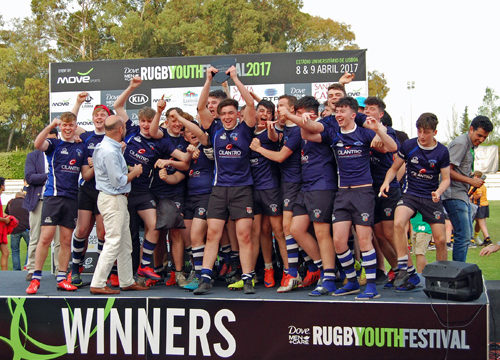 Old Crescent RFC Under 17/18’s took part in an international rugby youth tournament in Lisbon last weekend.  Our Under 17/18’s were successful in winning the prestigious Portugal Rugby Youth Festival Under 17/18’s tournament, winning five out of five hotly contested matches in the preliminary rounds before beating CF Belenenses from Portugal 13-10 in sudden death extra time in the final. 24 teams from England, Wales, Australia, Spain, Ireland, and of course Portugal, competed in this age group.

The tournament took place in temperatures in the high 20’s. Our Under 17/18’s won their two pool matches 28 nil and 10 nil respectively. They then went to beat a Spanish team 28-05 on astro turf to reach the quarter final stage. On the second day, the competition moved to knock out rugby.

The intensity and competitiveness of the tournament, and the weather conditions, were taking a toll on all teams. Old Crescent faced one of the top teams in Portugal, CDUL, in the semi-final. The Limerick lads came out of the blocks early with two quick tries to go on to win the match 12 nil and qualify for the final. The other finalist and favourites to win the tournament was a team from Lisbon called CF Belenenses.

The final kicked off in front of a large crowd in Lisbon University Stadium on a hard grass pitch in very hot weather conditions. Both teams displayed high levels of skill and physicality. After fierce opening exchanges between the two teams the home side scored a long-range penalty to go 3 nil up. This was the score at half-time. In the second half, Old Crescent started with a period of dominance that resulted in a converted try that put them 7-3 ahead.

Four minutes from time CF Belenenses hit back with a converted try to lead 10-7. The home crowd went ballistic. However, Old Crescent exerted serious pressure to earn a kickable penalty in the last minute of normal time. We converted this to draw the game 10 all. The match went to sudden death extra time. The Limerick boys continued to dominate and won the game and the competition with a penalty under the posts.

The Portugal Rugby Youth Festival is one of the best and biggest events for youth rugby in Europe. This festival welcomes some of the best rugby clubs from across Europe and it hosts around 300 games during the weekend. About 2,000 young players are distributed over 80 teams in four different age groups (from U/13 to U/19).  Our Under 14/15’s also took part in the tournament and they won the plate competition in their age category.

Update: A superb YouTube video of the Under 17/18 final is now available at  https://youtu.be/y1FIgRWSNsY