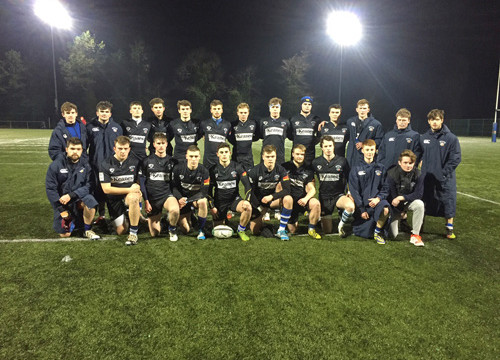 Last Thursday evening on the 3G pitch in Dooradoyle, Old Crescent RFC retained the Under 20 North Munster League Final against Tipperary opposition for the second year running, this year against Clanwilliam and last year against Nenagh.

On a cold, crisp, but dry night, this surface provided a terrific game that ebbed and flowed right to the very end, with Old Crescent getting home by just one clear score. Having played into the wind in the opening half, Old Crescent had the better of the initial phases, although Clanwilliam set down a very clear marker in the first scrum, forcing Old Crescent backwards on a number of occasions during the evening.

Old Crescent continued to assert themselves, backs and forwards alike working extremely hard and a fine break by Cian Reale was only halted by a very good defensive tackle which saved the Clanwilliam line. Clanwilliam then settled into the game and on 20 minutes a great break by their scrum half brought play into the Crescent 22 metres area, but Crescent defended competently and cleared their lines.

Old Crescent then set up a magnificent effort with a penalty option being kicked to the corner and what appeared like a training ground move working superbly, with Cian Reale talking the initial line out and the pack driving on to bring play to the line with Geoffrey Coyne being credited with the try, duly converted by Conor Lenihan to give us a 10-0 lead after 25 minutes.

Clanwilliam then had their best period of the game and began to make more frequent visits to the Crescent half, which up to that point had been rare. A penalty by their out half on 30 minutes was followed up by a period of dominance by their pack, which yielded a further penalty opportunity which slipped wide, but they were not to be denied as they continued to press and although Crescent had a penalty to clear their lines, they failed to find touch and found themselves under further pressure again. Clanwilliam elected to scrummage a further penalty opportunity and although this was initially repelled, a number of ‘pick and gos’ eventually breached the Crescent line and this was duly converted to leave the sides level at 10-10 at half time.

Uncharacteristically, Crescent were the slower of the two sides to settle into the second half, with a number of errors surfacing. However, Gavin Hogan’s break from play into the Clanwilliam 22 metre area brought us with 5 metres of their line, which was followed by a trademark direct burst from Paul McNamara who, despite a valiant effort to tackle him before he got to the line, was not to be denied as his strength and determination saw him touch down to the left of the posts, with the conversion duly added by Conor Lenihan.

Clanwilliam now really needed to score next as line breaks leading to opportunities were few and far between for them, but Crescent were able to cope with whatever came their way. Still with just a score between the sides it was anybody’s game – Crescent had a further opportunity when Sean Fitzgerald broke through followed by another break by Paul McNamara. Although Clanwilliam continued to have a lot of possession, much of this was outside the Crescent 22 metre area and Crescent were able to clear their lines without conceding penalties.

As the game entered the latter stages, the next nearest scoring opportunity fell to Dave Garry who seemed unfortunate not to be able to clearly ground the ball as he crossed the line and was bundled into touch, with the referee giving Clanwilliam some breathing space by awarding a 22 metre drop out. Crescent should really have closed out the game in this area of the pitch but one last rally from Clanwilliam saw them awarded 3 penalties on the bounce as they took the game from inside their 10 metre line into the Crescent 22 metre area. But time ran out for them and Old Crescent were not to be denied.

Overall, this was a magnificent performance from the entire Old Crescent Under 20 squad, backs and forwards alike, who were made to work hard throughout the entire game by a very able Clanwilliam side. The side’s dedication and commitment in response to the new Under 20 coaching group is a credit to the players and coaches alike. Many of this squad first represented the Club at mini rugby and have been part of a successful squad who, over the years, have now reached 10 finals, including winning two of the last three local Under 20 trophies played for. We hope and expect to see many of these players lining out for the senior team before the end of this season and into the future. Well done to all concerned.