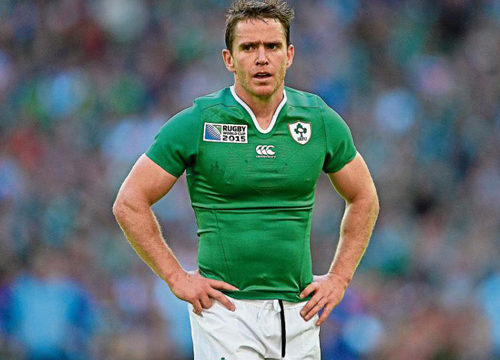 Reddan getting used to life after rugby – Limerick Leader Interview

You see Reddan didn’t have to. The 35-year-old Limerick man retired from professional rugby in June after a distinguished career. And he has recently started a new job in the aviation finance sector.

The former Crescent College Comprehensive scrum-half began his rugby career at Old Crescent RFC, making the switch from Munster to Connacht in 2001, before rejoining his native province in 2003 where he made 27 appearances over the following two seasons.

Two years later Reddan joined London Wasps where he won a Heineken Cup and a Guinness Premiership title, before signing for Leinster at the start of the 2009/10 season. There, Reddan played a significant role in driving the province to two Heineken Cup successes, an Amlin Challenge Cup and two PRO12 titles. The last of his 140 appearances came in last May’s Pro12 final.

And the exciting half-back enjoyed a stellar ten-year senior international career with Ireland, making his debut against France in the Six Nations in February 2006 at the Stade de France.

Reddan won his 71st and final cap for Ireland last June against the Springboks in Port Elizabeth. He also captained his country against Georgia in 2014.

Despite the rigorous schedule, Reddan insists he actually missed pre-season training this summer.

“This was my first year in 15 years I didn’t do a pre-season. I probably missed it, I always loved pre-season training. You are getting better, getting stronger, faster, it is a really nice part of the year. You see gains and the rewards.

“Matches then are different. You put in the work and the game may go your way or may not go your way. It is much harder to see the fruits of your work, sometimes.

“When the first week of pre-season was taking place, I was thinking, jeez, I’m two days behind the boys. All this kind of stuff comes into your head, but then you start to focus on what you have to do next in terms of my new job.”

Reddan said his decision to retire from playing after his decorated career was due to the exciting role he was taking up with aircraft leasing company, Avolon.

“It was a tough decision (to retire). Leinster and I were both trying to make our minds up. They were being very patient with me and I really appreciated that.

“I was going to play really until this job came up. I met Leo (Cullen) on the Monday morning after we played Connacht in the Pro12 final and until I told him straight out that I wasn’t going to play on, but I was still wondering if I would change my mind on the way to the meeting.

“The reason for retiring was because this other opportunity came up at this stage of my life, one that I had worked towards, gone to college for, doing a Masters in Financial Services to try and get into this. The opportunity was one I didn’t think I could give up.

“If you’re not sure about playing on, its tricky. The last thing you want to do is get to Christmas and I just don’t know if I would have been motivated enough if – say I got injured or got dropped – would I have the same fight in me to come back? Maybe I would have. If this opportunity hadn’t come up I definitely would have played on and given it everything.”

Reddan’s decision to call time on his distinguished career was made public in the days leading up to Ireland’s third Test against South Africa in Port Elizabeth in June.

“There was a really nice few days leading into the Test match for myself and my family. My dad Don and I had dinner the night before the game and then my brother flew from New York on the day of the game.

“I really wanted to enjoy the time I got on the pitch that day because if I am being honest, a lot of the time during my career, I wouldn’t say I was ever relaxed and enjoying the game, the odd time, the odd season, I might have managed it for a good few seasons, but a lot of the time I would have felt pressure from myself to perform and wound up, trying to get really into the game. My aim with that last game was to try and enjoy it. It’s not something that always comes naturally to me.

“I really enjoyed the last 15 minutes I had on the pitch. It was a shame we didn’t get the win, but that is the way sport goes.

“I had to tell my dad about 15 times that I was retiring, he kept trying to talk me out of it, he wouldn’t believe me. He has been such a support during my career, he obviously thought I could play until I was 40 and probably be the best scrum half in the world at 40!

“There was no sadness from a retiring point of view because we had planned for it, knew it was coming and were ready for it. I knew what I was moving on to next. The tough bit was losing the Test match.”

Reddan, a member of the IRFUs Professional Game Board, says coaching is something that has appealed to him, but he is blown away by the amount of time professional coaches devote to their trade.

“I always thought I would love coaching. This new job has caught my eye and I want to know if I like it. In some ways I am trying to find out if I can love something else as much as I love rugby. Hopefully I can.

“I am sure I could coach and be happy, but for now I want to try this new job and see where it takes me. If I can’t live without rugby and I need to get back – which I hope won’t happen – I am almost afraid of it, the coaches do so much work nowadays, you see how much commitment there is involved.

“You see Leo (Cullen) and Joe (Schmidt) the time and effort they put, how much of their lives they give up. You can imagine being the coach of Munster and Leinster and wanting to go for a pint on a Friday or Sunday night, or even after a game on a Saturday, how many friends can you talk to about the game, all they want to do is talk about rugby. You are giving up a lot.

“Those two coaches I have had, Joe and Leo, give everything they have to their roles.”

Reddan may have enjoyed a hugely successful career at club and international level, but he is quick to point to the influence Old Crescent had on his early rugby playing days.

“When I joined Old Crescent, there were some great leaders there, lads I got great experience from. I look at guys like Diarmuid O’Malley or Brian Toland.

“Brian’s a vet. As a 18 or 19 year old I was trying to go to college, to be a professional rugby player and I was watching this guy and was quietly blown away by him.

“There were people there who worked so hard both on and off the pitch.

“We had some very skillful players, the like of Stephen Tuohy and Brian Begley. There was a really good mix.

“Old Crescent gave me game time when I probably didn’t deserve it. When I was very young there were some really good scrum halves there. The club gave me a shot. I was fortunate to get a contract from Connacht out of it.

“I would have learned from the work ethic of lads at the club. I am forever indebted to them.”

Eoin Reddan soared to great heights as a rugby player over the past 15 years. Now he is poised to do the same off the pitch in his new role in aviation finance.