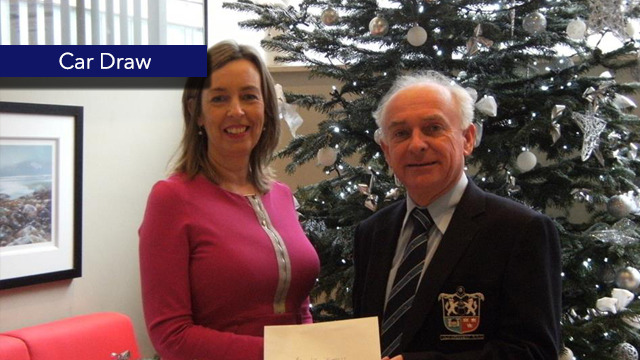 Last week saw our senior team take on Shannon RFC in the Cyril Fitzgerald plate. The Final score was Shannon 28 Old Crescent 11. HT was 21 – 8. Our Scores came from Sean Cunningham with a try & a penalty by Cathal Monaghan. Second half we pushed hard for scores and were unlucky not to score two tries. Another penalty by Cathal Monaghan left the score at 21-11. Shannon got a very late try as we were pushing to score but we never gave up and played to the end.

This week we have two important senior fixtures. Our 1st XV take on Richmond in the Ulster Bank League this Friday night at Canal Bank, kick off 7.30pm. Our 3rd XV are also in action on Saturday in the McInerney cup final against Thomond RFC, Kick off 2.00pm on the back pitch at Thomond Park. Please come and support both sides in an important weekend for both squads. We would like to wish both team captains Padraig Monaghan and Andy Cunnane and their respective squads all the best this weekend.

Ms. Ita Barrett received her Prize from Ger McNamara, Hon. Vice President Old Crescent RFC, as the latest winner of the Old Crescent RFC Supporters Club Car Draw. Congratulations to Ita and thank you to every member who supports this draw.

The Draw has taken place for the IRFU Raffle and I am sad to report that none of the winners was from Old Crescent RFC. Many thanks again to all who supported the Raffle. Hopefully we will have better luck next year. The winners can be viewed here at Irish Rugby News