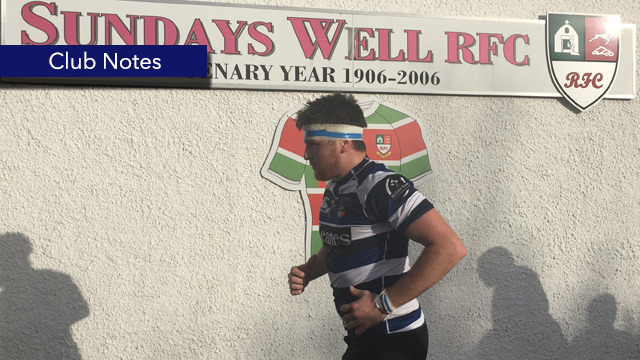 Old Crescent RFC members and supporters experienced the full range of emotion last week.  The high point was watching our former player Eoin Reddan lead out the Irish team in the Aviva against Georgia last Sunday afternoon.  We send our warmest congratulations to Eoin, and to his father Don and the wider Reddan family, on this magnificent achievement by a player who began his rugby career in our Underage Section.

The low point was the sad passing of long time member and supporter of Old Crescent RFC, Nevil O’Sullivan.  Nevil was at the heart of Old Crescent, always willing to help with advice and support for the club.  The large numbers who attended his removal and funeral were a testimony to the high regard in which Nevil was held by all Old Crescent RFC members and the wider Limerick rugby fraternity.  We extend our deepest sympathy to his wife Chris, daughter Meabh, sons Nevil and Jack, and his entire family.

Returning to rugby matters, our senior team travelled to Musgrave Park, now renamed Irish Independent Park, to take on Sundays Well in the UBL last Saturday.  Playing on a billiard table surface made slippy by heavy showers, it took our team a while to settle.  Sundays Well were first to score midway through the first half with a try mauled over the line out wide which they failed to convert.

Old Crescent had chances to score in the first half, including a penalty attempt in front of the posts, which we failed to convert leaving the home side in front by five points at the break.

It was always going to be a low scoring game in the wet conditions with both teams cancelling out each other’s attacks.  Crescent fought hard to get back on terms but it was Sundays Well who got the decisive score with a second try which they mauled over the line on the hour.  The convert was missed.

As the game went into the final minutes, Crescent mounted several attacks close to the Sundays Well line but the home side held out to win by ten points to nil.  A disappointing return for a lot of effort.

Our Under 20 side travelled to Bruff last Saturday to take on the local side in the Under 20 South West Conference. After a very good warm up and team talk by Captain Jack O’Neill, we started brightly against a Bruff side that had beaten Young Munster in their previous outing. We fell behind to an early penalty but we responded magnificently with our U20s dominating almost the entire remainder of the first half.

Our bench was in use quickly as Jack Hogan in putting his body on the line took a heavy blow to the head and was removed from the field as a precaution. With half time looming and despite a dominant scrum and ruck, we had only one missed goal kick to show for all that effort. A further kick at goal was spurned in an attempt to go in ahead and it proved to be an inspired decision.  Bruff defended their line stoutly but Robbie Sweeney found the smallest of gaps to squeeze over the line after numerous phases. Val McDermott slotted the conversion with a ‘beauty’ to give us a slender but well deserved lead of 7-3 at the break.

Bruff bounced back and an early penalty brought them right back in the game at 7-6 but we were not for giving in. Our line performed tremendously in the second half and we continued to have a significant amount of territory and possession – a lovely chip over the top by Val McDermott was gathered by Crescent and we scored by the posts. Val converted to have us leading by 14-6.

Then it was our turn to defend – Bruff with an improved scrum and greater urgency generated some territory which yielded penalty opportunities and they converted one of them to bring it to 14-9 before we scored again after a magnificent scrum and some further excellent rucking, with Val McDermott getting over out wide. Although the conversion was missed, this made it 19-9 to the visitors.

However, another converted penalty by Bruff brought them within a score at 19-12 and we finished defending in our own half with every player giving a man of the match performance. Particular praise must go to our pack who paved the way and defended so vigorously, and accolades also must go to our back line, many of whom played out of position but all played extremely well in demanding conditions. Man of the match went to Robbie Sweeney.